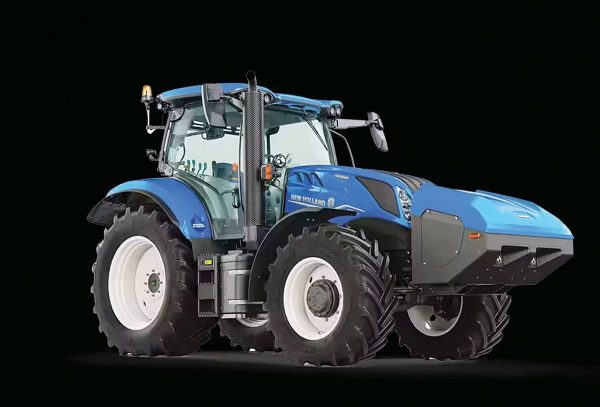 The surging price of diesel is sparking some renewed interest in cheaper “compressed natural gas” (CNG) to fuel the internal combustion engines of agriculture. Exhibit A: The buzz created by New Holland’s U.S. release of a new 100-hp tractor that runs on CNG.

Natural gas — also known as methane — is the cleaner-burning fossil fuel piped through many communities by companies like Enbridge. Canadian Natural Gas Vehicle Alliance Executive Director Bruce Winchester estimated that natural gas-powered farm equipment would offer a fuel savings of 30 to 40% over the conventional alternative.

For vehicle or tractor use, natural gas is compressed at 3,600 pounds per square inch and stored in a special onboard tank or canister feeding the engine with methane instead of (typically) gasoline.

The technology is nowhere near the radical departure represented by heavy, battery-powered, electric tractors and vehicles and instead retains the tried-and-true advantages of the familiar internal combustion engine.

Even a farmer’s gasoline-powered pick-up truck can be rather easily converted to run on natural gas, although Winchester says his organization has moved away from promoting the fuel in light vehicles as it did in the 1990s.

Today, the fuel has been more widely adopted by public transit buses and other fleets of vehicles with large engines. That’s especially true of North American garbage trucks, 60% of which are powered by natural gas and come that way from the manufacturer, according to Winchester.

Otherwise, conversion of a gasoline-powered vehicle costs about $5,000, he said. And the owner still has the option — if they have an adequate gas line — of installing an at-home or on-farm fuelling station for about $10,000. (Otherwise, there is a limited number of public natural gas fuelling stations across the province — 9 — including one in Ottawa.) The conversion cost compares favourably with the up-to-$20,000 premium paid for an equivalent electric vehicle, Winchester estimated.

He acknowledged some challenges around the adoption of natural gas for farm equipment — starting with the fuel’s scarcer availability in farm country.

But the beauty of a CNG-burning machine is that it can also use methane created by an on-farm biogester. “So now you’re turning a waste product into energy.”

New Holland’s new T6 machine features a purpose-built CNG engine with spark plugs, like a gasoline engine. Diesel-type engines (without spark plugs) can also be designed to use natural gas, though it must arrive at the engine in a mixture with diesel. One manufacturer now offers a diesel-type unit that can burn a 95% CNG mix, according to Winchester.