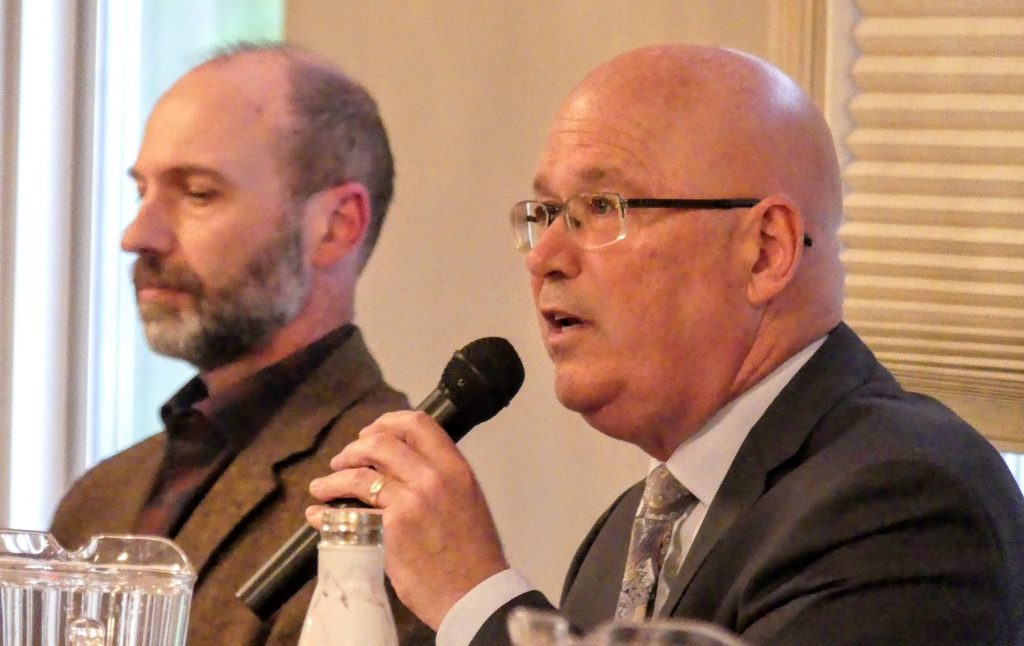 ROEBUCK — Ford government cabinet minister Steve Clark defended plans for a jail at the former Kemptville College campus and absorbed a potshot or two over his use of ministerial zoning orders — a controversial power opposed by the Ontario Federation of Agriculture — as candidates in the Brockville-area riding tackled hot-button ag issues.

Clark pointedly noted it was the former Liberal government that shut the college down in the first place, after Liberal candidate Josh Bennett slammed him for announcing the “shameful” prison project “without consulting anyone,” during the May 18 session jointly organized by two local federations of agriculture. Bennett cast the prison as being in line with a Progressive Conservative tendency to “pave over prime farmland” as shown by Clark’s ministerial zoning orders to accommodate development in his capacity as Minister of Municipal Affairs.

The format didn’t allow for direct exchange between candidates. However, the incumbent still levelled some counterpunches during his turn with the single microphone, as an audience of about 50 people looked on.

“It was a sad day when (then-Premier) Kathleen Wynne, as ag minister, closed down the college,” Clark observed, adding he was proud to have been part of a plan that returned some trades training to the campus while still preserving 600 acres of farmland at the site.

As a resident of Brockville, Clark noted that he lives close to that community’s correctional facilities without negative consequence. The town’s jail is being replaced and its St. Lawrence Valley Correctional and Treatment Centre is being expanded as well. “I always support corrections investments in Brockville, and I support it in Kemptville,” he declared.

The remaining farmland at the Kemptville campus could be transferred to the municipality for agricultural programming, he added.

Clark did not directly address ministerial zoning orders but did say the Ford government is aiming for more intensified development within existing towns and villages. Municipalities, however, haven’t shown much interest in the government’s latest study promoting that concept, he said.

Six out of a whopping nine candidates competing in the Leeds-Grenville-Thousand Islands and Rideau Lakes district participated in the event. The field reflected the right’s splintered disaffection with the Ford government’s pandemic policies — with Daniel Kitsch on hand for the New Blue Party and Stephen Ireland representing the Ontario Peoople’s Front. Registered candidates for the Ontario, Libertarian and Populist parties did not attend. Not much was said about the pandemic, except for Ireland’s acknowledgement that he was running, in part, out of anger for the damage caused by lockdowns.

Clark was alone in receiving an occasional smattering of audience applause. There was one brief exception for the NDP’s Chris Wilson when he recalled that it was the former Liberal government that closed hundreds of rural Ontario schools.

The candidates offered their thoughts on questions ranging from balancing the preservation of farmland with the need for affordable housing, to agricultural supply chain woes and support for the food processing sector. Amid the already soaring cost of fertilizer, all expressed concern over the farming sector’s reliance on products from Russia, now subject to a 35% tariff. Ironically, the riding is home to a former nitrogen fertilizer plant, in Maitland, a fact that didn’t go unremarked. Ireland said the Dyno Nobel site — formerly known as Nitrochem — ceased fertilizer production about 15 years ago.

Ontarians head to the polls June 2.