BREAKING NEWS
08:10
Home News Featured News Cause of half of all barn fires are unknown

Cause of half of all barn fires are unknown 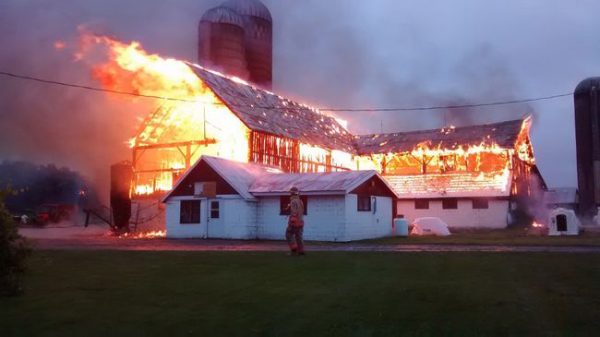 BELLEVILLE — A June 28 dairy barn blaze north of Belleville caused $1 million in damage and killed 32 cows, half of the farm’s unregistered Holstein herd.

The fire at Sullivan Farms, at 95 Deneyes Rd., began around 6 a.m. Two nearby silos were also damaged and had to be demolished.

Fire officials say the cause is not suspicious and might not be determined for months, if at all, which means that so far the Belleville-area fire is typical of almost half of all barn fires — no known cause.

The Office of the Fire Marshall reports that in Ontario from 2009 to 2013, 47 per cent of 829 barn fires had undetermined causes. When cause was determined it was usually due to equipment failure. Here are the main causes:

• 19.5 % caused by mechanical or electrical failures

• 3.9 % caused by arson. As recently as June, a Gananoque-area dairy barn went up in flames, destroying about 40 cattle. A teenager was charged with setting the blaze.

Barn fires can be very damaging but are rarely deadly to people. The average barn fire caused $167,000 in damages and there was only one fatality from 2009 to 2013.

In 2011, OMAFRA released a fire prevention booklet to help farmers prevent fires. That booklet — view at www.omafra.gov.on.ca/english/engineer/barnfire/toc.pdf — comes with a 29-item checklist that farmers should use twice a year, around daylight savings time, says OMAFRA environmental specialist Jacqui Empson Laporte.

Other tips include checking to make sure protective equipment hasn’t been displaced after pressure washing a barn; asking a fire prevention official to visit the barn for an inspection; and asking if your insurance company has infrared detectors to see if there is an area of the barn that is too hot.

While many think of older barns as being at greatest risk of a fire, that’s also not always the case. Laporte says she’s heard of fires caused by corrosion in electrical equipment in barns fewer than five years old.

Laporte warns swine farmers of foaming manure, where the manure flows like lava, but builds up methane gas. If that manure is stirred or agitated, there’s a chance of a fire or explosion.