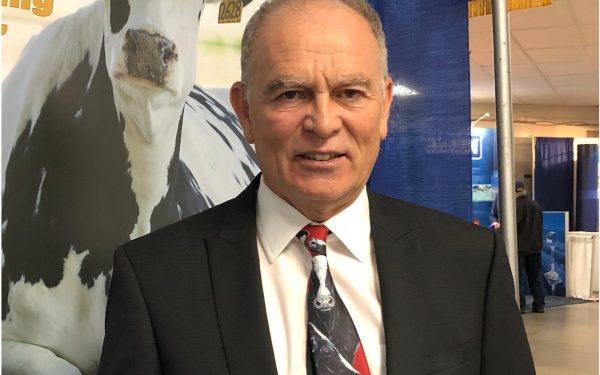 Mark Comfort was named the International Person of the Year at the annual World Dairy Expo in Madison, Wisconsin.

EBI used only 16 units of U.S. semen while servicing an area with nearly 150,000 dairy cattle that year, according to Comfort, whose ensuing battle to open markets is a big factor in his recognition this month as International Person of the Year at the annual World Dairy Expo in Madison, Wisconsin.

The 1950s-era regulations that still applied in the early 1980s were “no longer practical,” Comfort says, as they didn’t recognize the new reality of easily transportable frozen semen.

Comfort challenged the established order when he left EBI to form his own artificial insemination company, Transfer Genetics, and began legally importing frozen semen from south of the border. He also trained farmers to breed their own cattle. In 1988, he prevailed when the province tried to prosecute the company for contravening the A.I. Act. Comfort’s win in a Guelph court room led to the modernization of the law and opened the border to U.S. semen.

Today’s top 10 bulls in the genomic world can trace their lineage back to other bulls that were born as a result of the new full-scale access to American genes in those early days, Comfort said. The same is true of each of the premier sires in the last 14 years.

“I’m very proud of that,” says Comfort, who lives in Cardinal and sold his upstart A.I. company to Select Sires in the early 2000s.

Comfort says he is now one of only three Canadians recognized as International Person of the Year by the World Dairy Expo organization, following Lowell D. Lindsay of Guelph (2014) and George Murray Clemons of Brantford (1987). He was nominated by the late George Miller, Select Sires founder, prior to Miller’s death at age 94 in February 2021.

“His passion for progress brought contributions and achievements that also boost the accomplishments of others,” Miller wrote.

The award is “truly the greatest honor of my life, and it could not have been achieved without the help of so many people along the way,” Comfort says. “These people all believed in the same goals, to always do what is right and best for the customer.”

He remains active in the dairy world, establishing his own pedigreed herd, Comfort Holsteins, in 2010. He’s also well known for Udder Comfort, his 20-year-old company that makes a popular topical ointment applied to cow udders. The product is now found in 30 countries “and is the leader in the category,” he says.