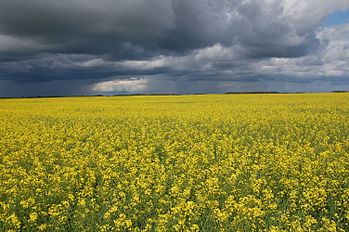 Renfrew-area producer Jennifer Doelman grew both winter and spring varieties this year — 153 acres of spring canola and 90 acres of winter canola. About half of the winter version survived, but what survived yielded 67 bushels per acre, she said.

Since the 1990s, the farm’s regular crop rotation has included spring canola, which thrives in Doelman’s more northern area of Renfrew County. This was her first season with a winter canola variety — ‘Mercedes’ — and Doelman described it as a “game changer” by potentially opening up canola production to areas just a little farther south where spring canola simply doesn’t do well.

Canola makes a great cover crop with a deep-root system, and yields a valuable oil seed, she said.

In Ontario, production of canola — the spring variety — is typically associated with points farther north, like Temiskaming region, along with Grey and Bruce counties, according to Ontario Canola Growers Association executive director Ryan Koeslag.

The advent of better winter canola has fostered “considerable interest” in growing canola elsewhere in Ontario, bolstered as well by prices for the crop that have doubled from a couple of years ago.

“There’s been a lot more interest in incorporating a winter canola variety into a rotation, rather than just strictly going with a winter wheat.”

“Hopefully, as that interest in winter canola continues, we’ll see more acres grown,” he said. “There’s still a strong demand for canola,” he added, citing the continued impact of the 2021 drought in western Canada.

The crop has been working out for Felix Von Gunten. The Chesterville-area cash-cropper grew winter canola the last two years. “I’ve got to find a better way to combine it,” Von Gunten said, highlighting one of the challenges with canola: setting up a combine to handle the tiny kernels.

“Trying to get it off the field is not fun. It just wants to run everywhere except the combine bin,” he quipped.

Von Gunten said he grew 98 acres last year and 77 acres this year and was reluctant to offer his yield estimate because of mechanical challenges. But the quality of the harvested crop has been good, Von Gunten said, and he expects to plant another crop of canola for next year as well.

Michael Aubé, of nearby Rutters Elevators, said he only grew 10 acres and yielded 55 bushels per acre, but combining challenges translated into leaving another 20 bushels per acre on the ground. Rutters is one of the few elevators set up to dry canola, he said.