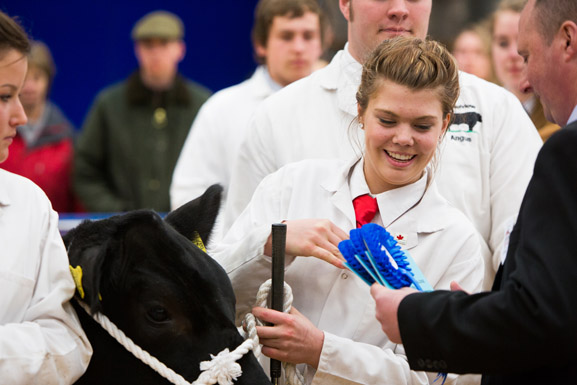 PLAINFIELD — Hailie Conley tested the show ring on the far side of the Atlantic last month with no room for first-time jitters as 25 curious onlookers huddled around her team’s stall while they prepped their cattle for competition.

“It was crazy. You didn’t want to mess up, that’s for sure,” says the 15-year-old from Plainfield, north of Belleville, who travelled with Jack Oates, of Brome County, Que. and Courtney Walker, of Simcoe County, to the National Young Show Stars Challenge last month in Malvern, England, about 215 kilometres northwest of London.

They finished a close second in the beef showdown, only four points out of first place and the best-ever showing for a Canadian team.

But they were a little out of their element, says Conley. Their fitting style drew crowds because Europeans don’t fit legs or ball tails and use sticky red or black soap instead of glue. She had to learn to show in pairs, matching pace to walk heifers side-by-side.

“When we got there, the heifers would not co-operate,” says Conley, who spent hours coaxing and primping the shaggy heifers, even sleeping in a tent that got drenched by an overnight rainstorm. “By show time, they were so used to us they were like our own.”

Conley took it all in, making friends, picking up fitting pointers from her teammates, and learning the ropes of European cattle marketing and show-ring etiquette. Keen to head back next year, Conley is hoping a stint preparing show cattle at Eby Ranch in Kansas this summer will give her a leg up.

“There are not a lot of youth that are willing to jump in and get their hands as dirty as she is,” he says, anxious to give Conley every advantage to stay in agriculture and eager to convince her to attend college stateside. “You can just tell she’s going to be successful in anything she does.”