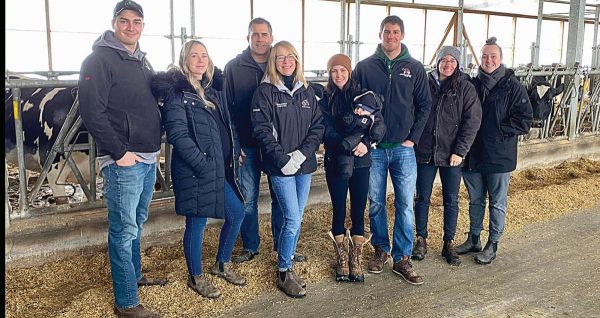 THEDFORD — Half of the top-10 best-managed dairy herds in the country are located in southwestern Ontario, including the best in Canada. Stewardson Dairy of Thedford — operated by the Stewardson family — was recognized as tops in the nation, as calculated in 2021 by Lactanet Canada, the milk-recording service agency.

Jeff Stewardson said it was his farm’s seventh appearance on the list in almost 10 years and its first time at the top. “We just tried to do the best job we could and it just turned out as number one,” Stewardson said. “It was gratifying, and it’s a real morale booster for our family and for our employees, an all-around good feeling.” The top place finish reflects “setting some goals and seeing the results, and that is really rewarding,” he said.

The involved family members work well as a team, with each handling an area of expertise that includes an official job description. “My wife Brenda takes care of administration, son Dan is mainly in charge of equipment and crop management, son Dylan is focused on the dairy, and daughter Nicole is responsible for the farm’s bird broiler chicken operation,” he said. Their management style includes strategic planning and capital budgeting together, he added, “and everybody has a role in that.” He specifically attributed the success of the dairy operation to “identifying, implementing and monitoring necessary protocols and procedures in all areas of milk production.”

The results of the family’s continued efforts speak for themselves: The 270- head Holstein milking herd produces 1.9 kg of butterfat per cow. Somatic cell count sits at just 87,000.

Stewardson pointed out that placing high on the Lactalis best-managed list really is about efficient management and not — contrary to some comments he’s heard — about spending money “at all costs” in pursuit of the honour.

“There’s an opinion out there that when you win … that you’re spending money recklessly to win it. But we don’t like spending money at all on anything,” he said. “We don’t buy expensive feed additives or anything like that. You ask our feed guys. They can’t get us to use any expensive ingredients.” Instead, the farm is frugal and feeds a basic high-forage diet to animals with excellent genetics, he said.

“We really are very conscious about cost of production, and are really focused on making milk as efficiently as we can.”

Stewardson Dairy is in its 37th year of operation. Jeff Stewardson counts himself as second generation at the current farm site, though he’s technically a seventh generation farmer counting back to his ancestors’ arrival in Canada in the 1850s.

Beyond the top spot, the 2021 numbers put Heerdink Farms of St. Mary’s (Albert and Hans Borgijink) in third place nationally, Summitholm Holsteins of Hamilton (Joe Loewith and sons) in sixth and Larenwood Farms of Drumbo (Chris McLaren) in seventh. Pfister Dairy Farm of Mitchell, operated by the Pfister family, was 10th.

Lactanet says the information tells a story about the sustainability and health of a dairy farm, as managed by the operator.