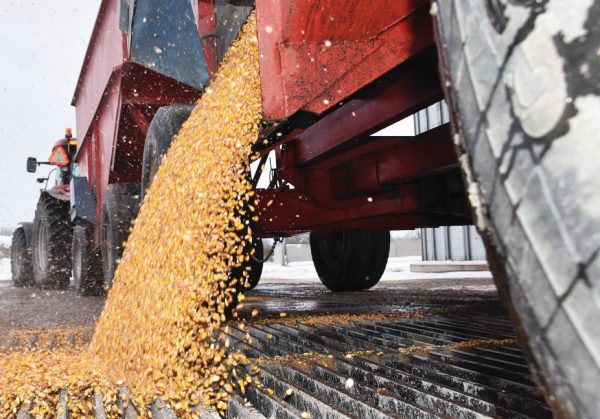 Eastern Ontario had a better than expected corn harvest in a year of solid prices. Corn empties into Rutters Elevators.

But Ontario saw a winter wheat yield record for both soft red and soft white which cracked 100 bu/ac for the first time. Ontario corn and soybean yields were healthy but dipped below Ontario’s 2021 record yields.

That’s according to the latest figures from Statistics Canada.

Canadian grain corn production rose 4 % in 2022 to a record 14.5 million tonnes grown on 3.6 million acres, according to StatCan. Corn yields edged up 0.2 bushels per acre to 160.4 bu/ac.
Ontario’s average corn yields did better than that, at 166 bu/ac, though down 5.3 % from 2021 because of drier conditions in the southwest.

Ontario produced less winter wheat in 2022 than in 2021 — with just over 2.2 million tonnes harvested from 848,000 acres in 2022. The 2021 wheat crop weighed in at nearly 2.7 million tonnes on just over 1 million acres. Though a smaller crop than a year earlier, record yield performance was the story of Ontario’s 2022 winter wheat: StatCan recorded a whopping 96.5 bu/ac average for all three winter wheat types. Agricorp also reported record-range yields.