Bull tossed him right into the crowd 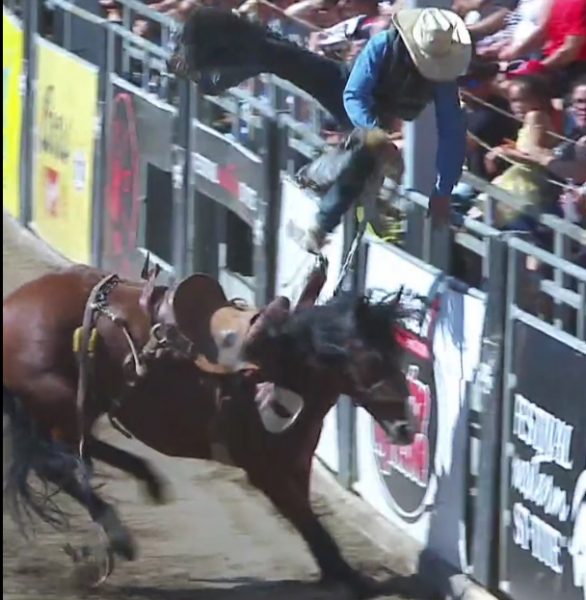 KEMPTVILLE — A bucking bronco sent Allan Mussell flying high over an 8-foot-tall corral fence and into the spectator stands. His cowboy boots were the last thing to slip from view as he disappeared headfirst — and backwards — into the crowd.
That wild ride in St-Tite, Quebec, lives on as a highlight-reel moment of the 2022 season. “I landed in the first row, nobody got hurt,” said the 25-year-old beef and crop farmer from Osgoode. “They helped me up and pushed me back into the arena.”
Analyzing the moment, he said that “Where you look is where you’re going to land.” He took his eyes off the “tree” on his saddle and once that happens, a cowboy knows the ride’s over. Then comes a telltale “double-slap to the butt”, the vault into the air and gravity takes over.
He competed more than 40 times in 2022 and admits he was “petrified” the first time he mounted a bronco four years ago.
“When it’s no longer nerve wracking, you find a love and a passion for it,” he said at ringside during the recent International Plowing Match in Kemptville, where he finished third among ‘saddle bronc’ riders. “The more the horse bucks, the more you enjoy it.”
Injuries come with the territory.
He’s been knocked a few times and this year got “knocked out really bad” and was taken to hospital.
He also “messed up” his shoulder last year. “I dislocated it — or hyper-extended it — and I had my friend pop it back in.”
A horse kicked him in the face at a Quebec rodeo last year. “I rolled underneath it, my head popped up and a hoof … caught me in the face.
“I had a friend of mine glue my forehead back together in the horse trailer.”
Other than that, “I’ve been pretty healthy.”
His parents were initially “very hesitant” at his rodeo participation, though “it’s kind of grown on them.” His mother’s biggest worry is, “you’ve to make it to work on Monday,” he says.
Mussell enrolled in the RAM Rodeo “build-a-cowboy school’ at Orangeville and figures he’s invested about $2,000 in equipment, including his padded vest, chaps, and bronco saddle. He wears a cowboy hat instead of a helmet, the typical practice for bronco riders.
He counts about $6,000 in competition winnings this year. “There’s still time to win more.”
He’s ranked seventh in Canada among rookie bronco riders on the International Professional Rodeo circuit as COVID restrictions turned this year into his first full year competing. He’s ranked third on the RAM Rodeo circuit.
“Everyone thinks, how hard can it be to stay on for eight seconds?” he said. “But it’s a long eight seconds.”