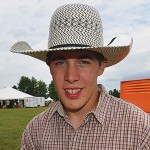 SPENCERVILLE — Sam Titley is only 16 years old and has already ridden on about 100 bulls and steers.

The native of Glen Robertson, east of Alexandria, competed in the Spencerville Stampede July 25 and said that, if he had finished among the top five riders, he would have shared in prize money of $1,500. The three-day rodeo attracted more than 1,500 people and was organized by area egg farmer John Beking.

In the bull-riding event, the goal is to hang on for dear life for at least eight seconds. In spite of wearing a hockey helmet and mask, Titley lost a tooth in the corral earlier this year. “A bull hit me in the face and pushed my helmet back into my teeth,” he said.

Titley said he started out practicing on beef calves at the home farm and that he would like to do this full time. “Some guys in the States make a living at this, seven days a week.”

It’s nerve-wracking and exhilarating. He calms himself by saying a prayer and focuses on the neck and head of the bull to see which way it turns. From there, he says, “it’s all muscle memory.”