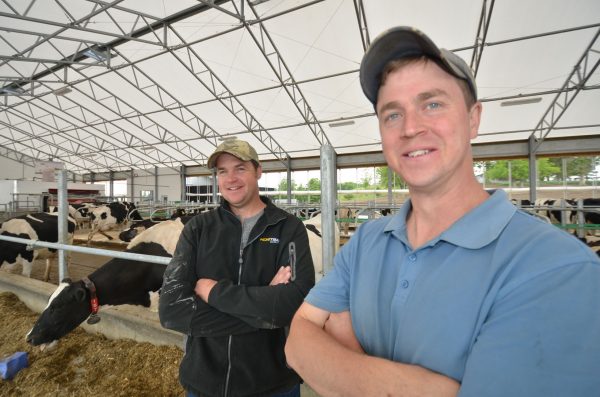 WILLIAMSTOWN — It wasn’t long ago that the MacLachlan family faced a decision: get a new barn or get out of milking.

They were milking 35 cows in a 100-year-old, dark and low-ceiling tie-stall barn when they decided they had had enough.

“It was a very labour intensive barn,” said Don, 31, who farms in Williamstown, just northeast of Cornwall with his brother, Andrew, 41, and their father Lyall, 80. “We were at capacity and couldn’t expand anymore. We hardly spent any money on it, and we didn’t really want to. It needed a lot of work.”

The brothers spent several years touring other barns to see what they liked. On March 31, the cows moved into a three-row freestall barn with one Lely robot installed at one end.

“We’ve been talking about building for a while, and we were at the stage that we either did something like this, or we almost got out of the dairy business,” he said. “We were both still young enough that we figured now is the time to do it.”

With Andrew having two boys and Don having one, the brothers wanted a barn they could hand down to the next generation.

Don estimates production in the new 95-stall 74 ft. by 217 ft. barn has increased 10 to 15 per cent since the cows moved in. But some of that increase may be from fresh cows that came at the same time as the move.

“It was a big change for us too,” he said. “You’re on such a rigid schedule before, in a tie-stall milking twice a day. This (new barn) gives you so much more flexibility. It takes a bit to get used to it, but I think we’re catching on to it.”

The move wasn’t without its hiccups. Some of the 45 milking cows are having trouble adapting to the new technology but the MacLachlans see improvements every week, said Don. Here are three of Don’s favourite features in the new barn.

The We-Cover building with its fabric translucent roof lets in natural light, which is good for the cows and the MacLachlans. Cows increase production when they are in natural light, Don said. “It’s just like yourself. No one likes to be in a dark hole.”

The curtains on the barn walls open and close automatically as sensors monitor temperature, wind and precipitation getting into the barn.

All lighting is LED, meaning not only will they save money on electricity over conventional bulbs, but they will last longer.

Don said the lights are also designed to increase the cows’ milk production.

“We have the lights on a timer, and they go on and off at certain times of the day to give the cows the right amount of light they’re supposed to need to get maximum production,” he said.

The MacLachlans went with three Ventec fans to circulate air. The fans are angled so there’s better air flow to the cows. The brothers say they were impressed with the amount of air flow when they saw them in another barn.

“The few hot days we’ve had, they seem to really cool down the barn, so we’re happy with them so far,” Don said.