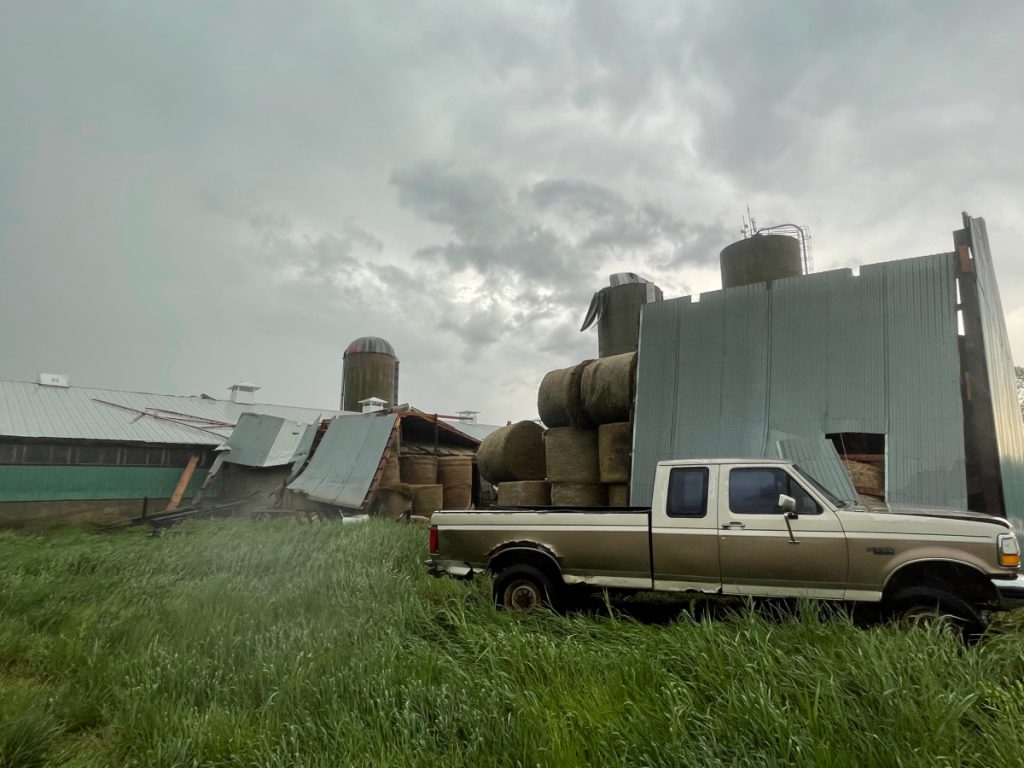 Mount Brydges chicken and cash cropper Becca Bakker lost a storage barn as the fury of the May 21 thunderstorm blasted through her farmstead, 20 km west of the hard-hit city of London. (Photo supplied by Becca Bakker)

MOUNT BRYDGES — Mount Brydges chicken and cash cropper Becca Bakker saw firsthand the fury of the May 21 thunderstorm as it blasted through her and her husband’s farmstead, 20 km west of the hard-hit city of London.

The high winds blew down a hay barn and ripped off the roof and walls of a former cow barn that was also used for hay storage. A Coverall-type building was bent out of shape and a nearby tin top of a concrete silo split apart.

Fortunately, the couple’s three-year-old broiler barn was unscathed, and they never lost power.

Even so, damage at the farm is estimated at $500,000, said Bakker, who was caught outside with the high winds. The gusts pushed her backwards down the laneway, while the hay barn collapsed behind her. “Because of how loud the wind was, and the rain whipping at me, I didn’t even hear it… Tree limbs were snapped off and driven into the ground.”

The most violent part of the storm lasted no more than 15 minutes, she said. “We were definitely the worst hit in our vicinity,” she said. “I know some people (in the province) had it a lot worse.”

The wall of thunderstorms initially crossed Michigan at less than 50 km/h, according to reports, but gained speed as it barrelled through southwestern Ontario.

At Faircrest Farms, a chicken farm west of Woodstock, manager Lois Holder said the operation sustained no damage in the Saturday storm but lost power for three days when a falling tree took out a hydro line along a nearby road.

The late afternoon storm included hail the size of nickels and high winds that in Eastern Ontario reached a speed of 190 km/h. Winds ripped off barn and shed roofs. Tin roofing littered farm fields. Hundreds of trees were uprooted and Hydro One estimates that 800 hydro poles toppled across the province. 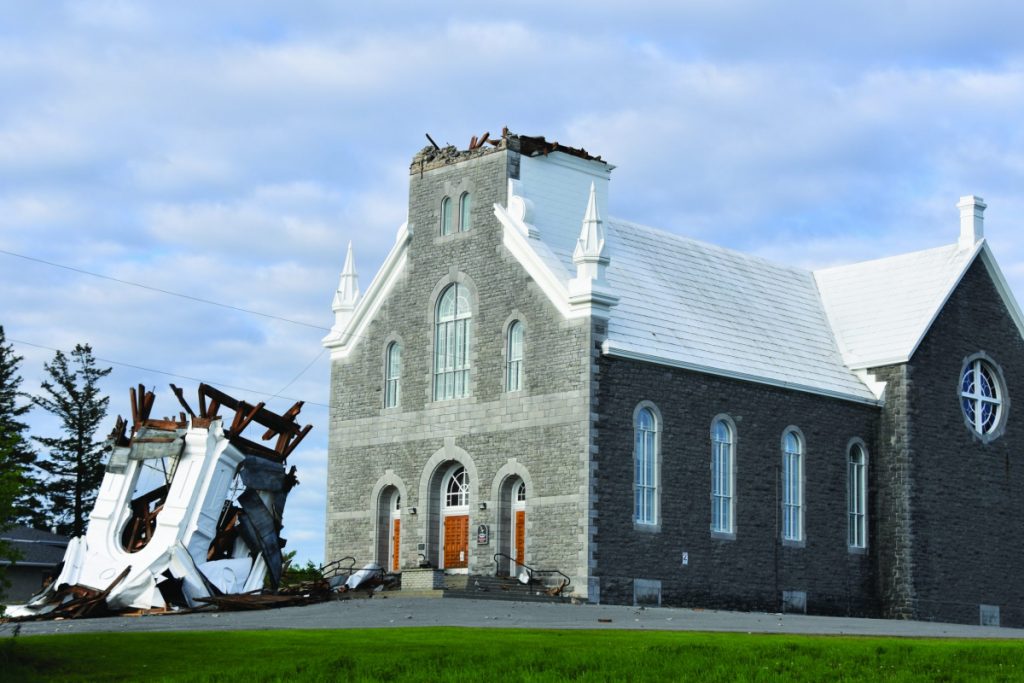 Powerful winds knocked the steeple into the parking lot at a small Catholic Church at Sarsfield, east of Ottawa. (Patrick Meagher photos)

At Navan, east of Ottawa, high winds destroyed the barns of five neighbours. Gord McFadden’s dairy farm saw the worst of it. Three Harvestore silos were dented and the roof of the dairy barn crashed onto the cows and was stopped by the cattle headrail. Five cows were destroyed due to injury. Several had broken legs and they think that only one had a broken back.

It took them three hours to pull out parts of the sagging barn wall, cut out parts of the hay loft floor so cows could stand up, and lead them to waiting trucks and trailers. All the cows were taken to another farm for milking. The next day, more than 100 people showed up to help clean up.

Two days after the storm ripped through Ontario, there were still 226,000 Hydro One customers without power and power lines lying across rural roads. The storm went on to knock out power in about 500,000 homes in Quebec. Uxbridge, Peterborough and two townships, all east of Toronto, declared a state of emergency. For the city of Ottawa “this event is significantly worse than both the ice storm of 1998 and the tornadoes of 2018,” Hydro Ottawa said in a press release. During the ice storm about 600,000 homes lost power in Eastern Ontario.