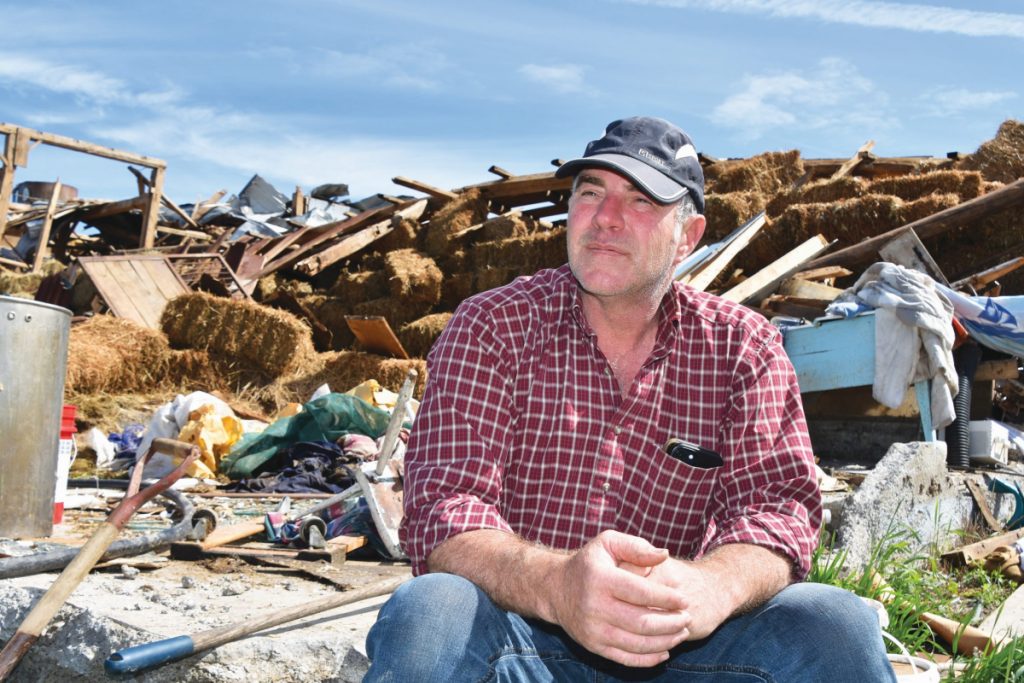 John McWilliams, of Navan, sits in front of what remains of his hay barn. He lost two barns and five sheds when the treacherous May 21 storm thundered through Eastern Ontario. The Ottawa area suffered some of the worst damage. (Patrick Meagher photo)

NAVAN — A devastating wind storm pounded Ontario and Quebec and was especially nasty around Peterborough and Ottawa.

The late afternoon storm on May 21 included hail the size of nickels and high winds that reached 190 km/h. Winds ripped off the roofs of fabric shelters. Tin roofing littered farm fields. Hundreds of barns and sheds across the province were missing pieces of roof or were completely destroyed. Hundreds of trees were uprooted and Hydro One estimates that 800 hydro poles toppled across the province.

East of Ottawa, Navan crop farmer Wyatt McWilliams lost his more than one-century-old hay barn and several sheds. His cement silo crashed onto the roof of the barn while he was in another section with one of the horses. Two days later a generator was humming in the yard and more than 20 people were cleaning up the mess. “What’s impressive is community spirit,” McWilliams said. Friends and family kept coming all morning. Front end loaders arrived and two friends dropped in with coffee and donuts. Even Ottawa Mayor Jim Watson showed up. 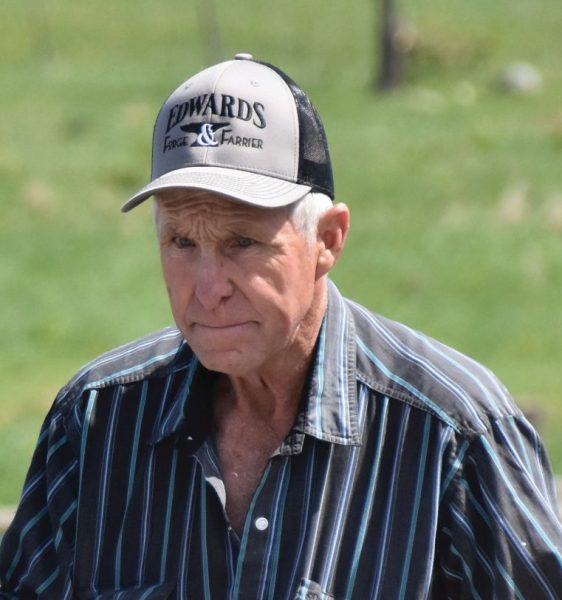 Family friend Harold Staal was shocked. “The McWilliams got hit hard,” he said. “Every one of them got hammered.”

Around the corner on Trim Road, Wyatt’s father, Willard McWilliams, lost a strip of tin on his barn roof. Next door, high winds flattened cousin Chris’ former dairy barn and across the road, cousin John McWilliams lost two barns and five sheds. His fabric-covered metal-frame equipment shed and metal posts lifted right out of the ground, turned over and twisted like a pretzel. A large tree overturned in his front yard.

“It was all gone in 20 minutes,” John McWilliams said. He even had a tarp over his house to keep the rain out. “We have no room left for storage.”

Just down the road, Gord McFaddens’ dairy farm might have seen the worst of it. Three Harvestore silos were dented and the roof of the dairy barn crashed onto the cows and was stopped by the cattle headrail. Five cows were destroyed due to injury. Several had broken legs and they think that only one had a broken back. Several others looked like they had road rash on their backs. Others lay down and didn’t move until they were coaxed out. 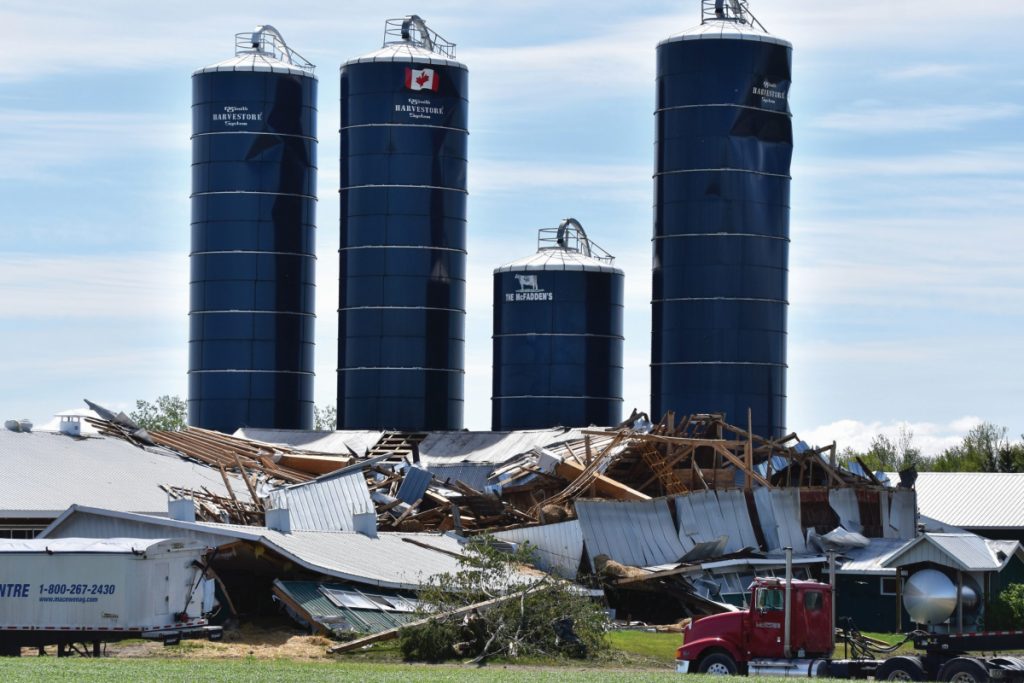 Gord McFadden’s Navan area dairy barn was flattened. Five cows had to be destroyed. Three of the four Harvestore silos were dented during the storm. Area residents say McFadden’s farm got hardest hit by the storm.

“They were jammed in there,” Gord’s son, Devyn McFadden said. “We were pretty discouraged. We didn’t think we would get them out. But it was miraculous.”

It took them three hours to pull out parts of the sagging barn wall, cut out parts of the hay loft floor so cows could stand up, and lead them to waiting trucks and trailers. All the cows were taken to the Schoutens’ Cornerview Farm at Richmond, where they will be milked until a new barn is built, McFadden said.

The next day, more than 100 people showed up to help clean up, McFadden said.

Nearby, at the Rollins tie-stall dairy barn on Magladry Road, there was a huge hole in the dairy barn after the top-half of their cement silo smashed to the ground. Caroline Rollins was mixing powered milk for the calves when she heard the storm picking up and went to close a barn door. The room she left all-of-a-sudden filled in with pieces of cement silo. “My dad and my husband were searching for me,” she said. “They thought I was under (the debris).”

Environment Canada Senior Climatologist David Phillips described the rare weather pattern as an army of thunderstorms. Hydro One said that the storm caused 1,700 separate power outages. Two days after the storm ripped through Ontario, there were still 226,000 Hydro One customers without power and power lines lying across rural roads. The storm went on to knock out power in about 500,000 homes in Quebec.

The town of Uxbridge, east of Toronto, and Clarence-Rockland, east of Ottawa, declared states of emergency. The City of Peterborough also declared a state of emergency as did the surrounding townships of Douro-Dummer and Cavan Monaghan.

For the city of Ottawa “this event is significantly worse than both the ice storm of 1998 and the tornadoes of 2018,” Hydro Ottawa said in a press release. During the ice storm about 600,000 homes lost power in Eastern Ontario. 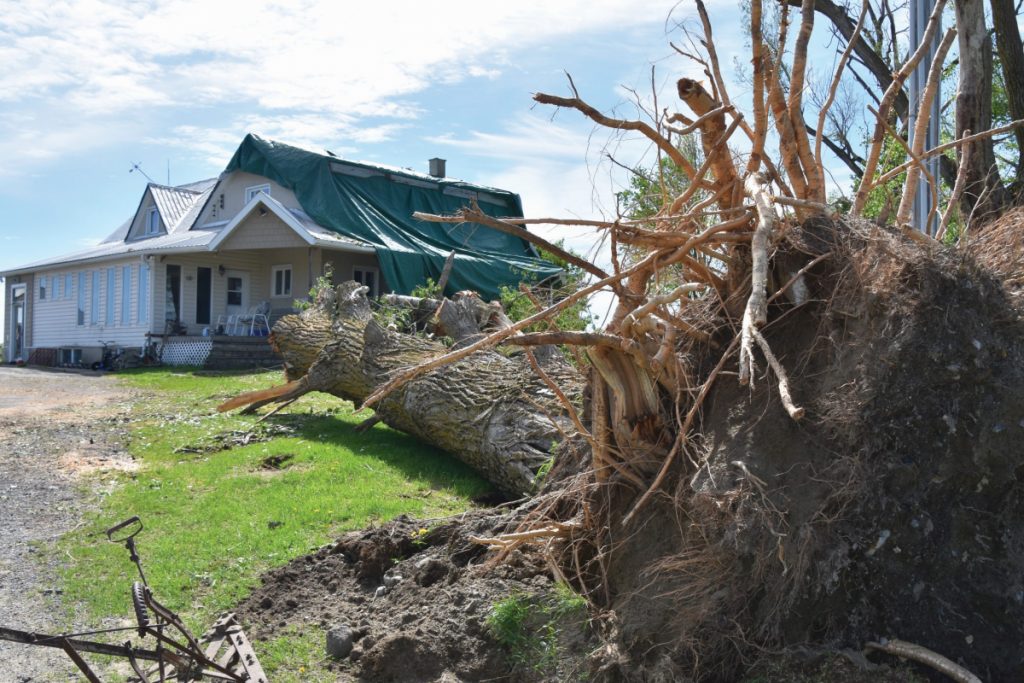 A large tree fell onto John McWilliams’ Trim Road house, at Navan. He put a tarp on his roof to prevent water from getting in. 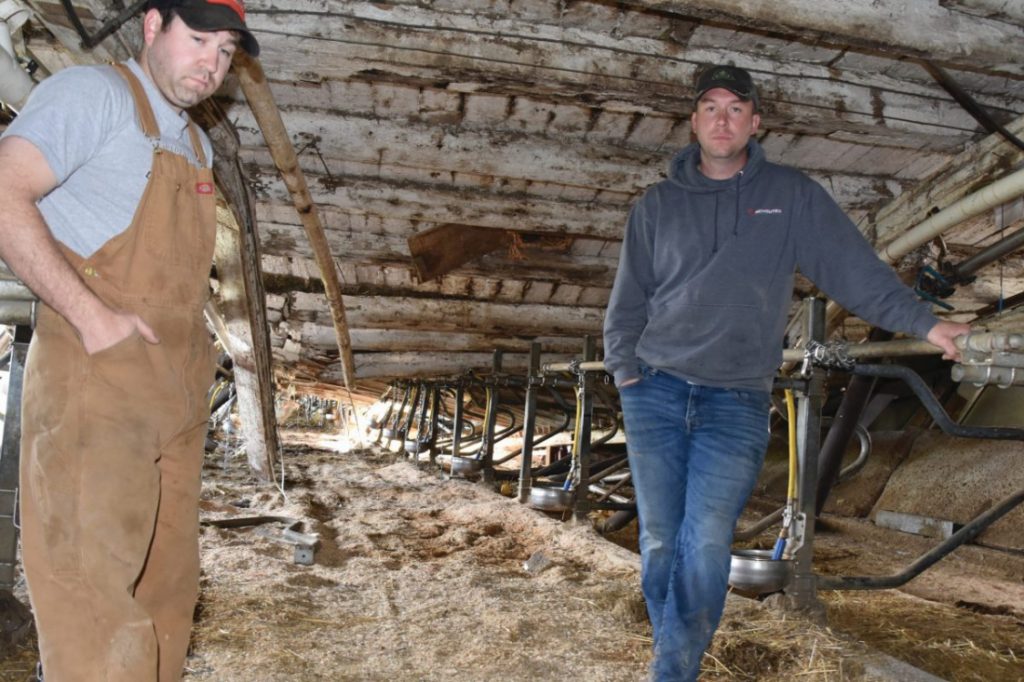 Devyn and Travis McFadden inside the dairy barn. You can see the ceiling resting on the cattle head rail about 44 inches off the ground. 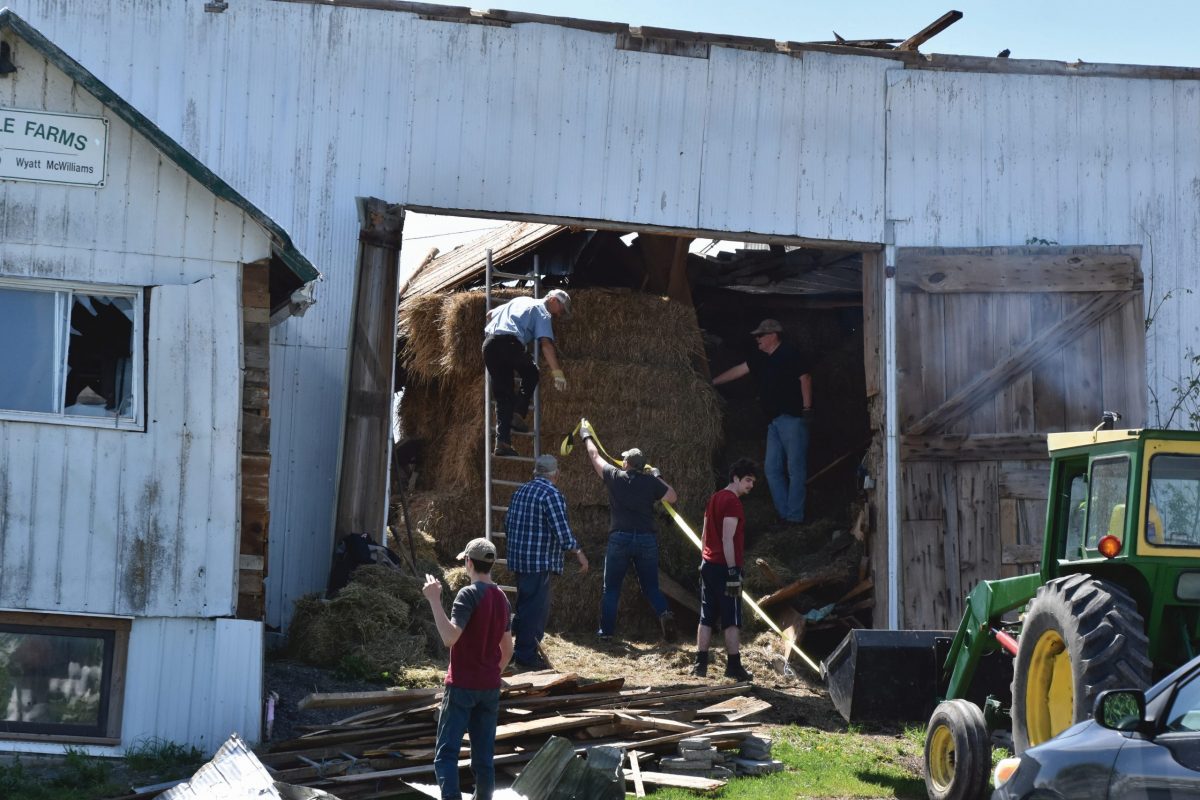 Wyatt McWilliams of Navan was touched by the outpouring of help from neighbours and friends who showed up to help with clean up at his place. 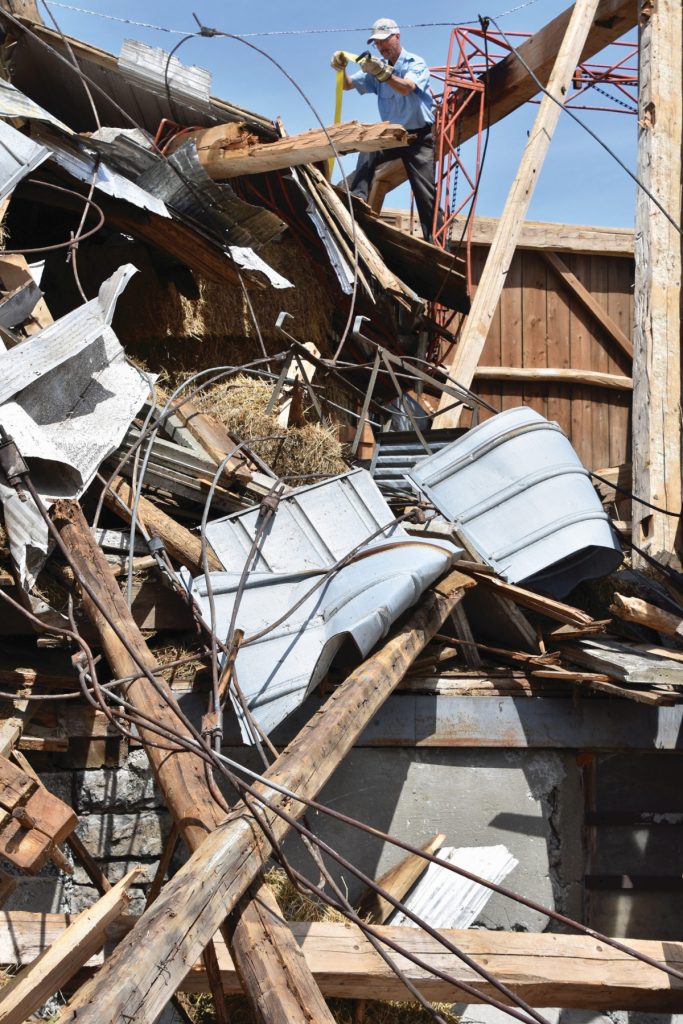 Vars dairy farmer Jeff Hamilton wrapped strapping around a beam so that a tractor could pull the debris from the barn at Wyatt McWilliams’ place in Navan. 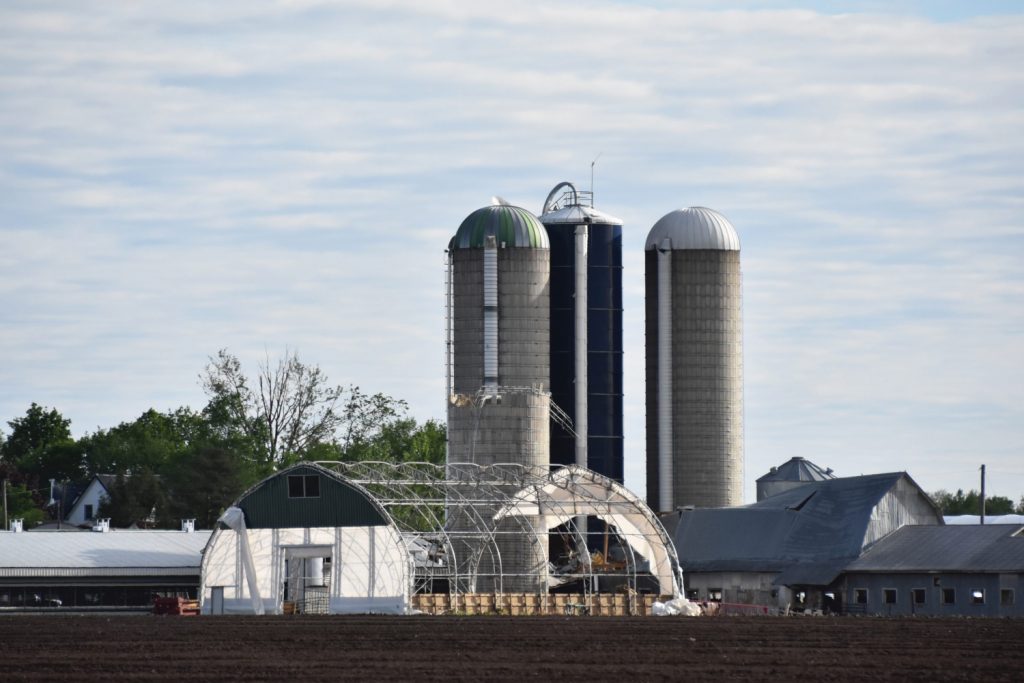 At Ronald Rollin’s dairy farm on Dunning Road, near Navan, the roof covering blew off their fabric-covered structure and one of the cement silos toppled into the dairy barn (also seen below). No cows were injured. 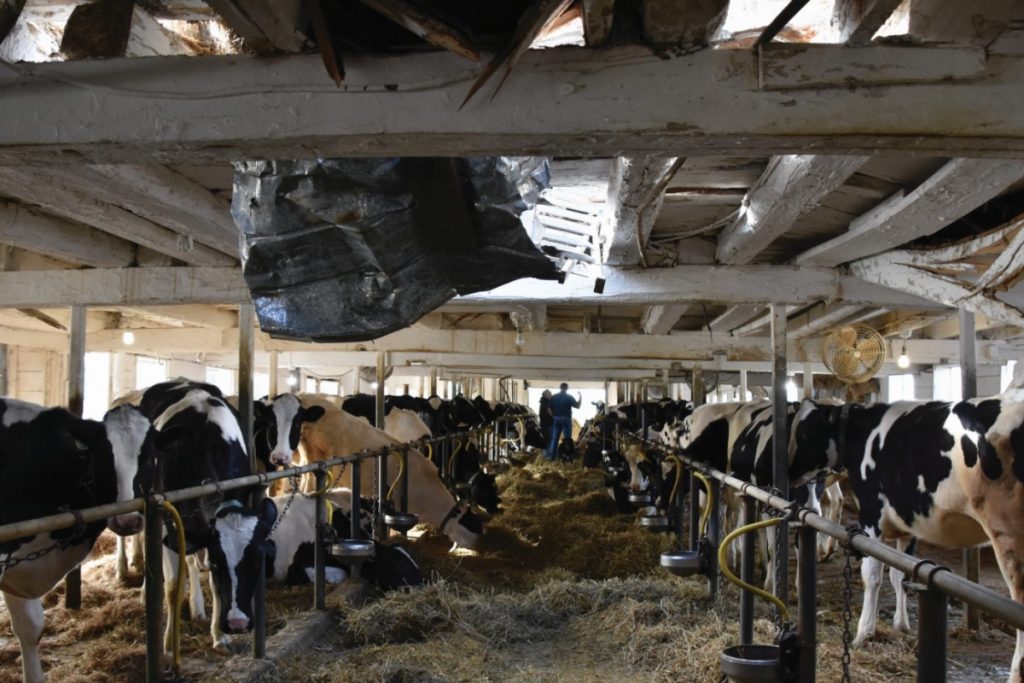 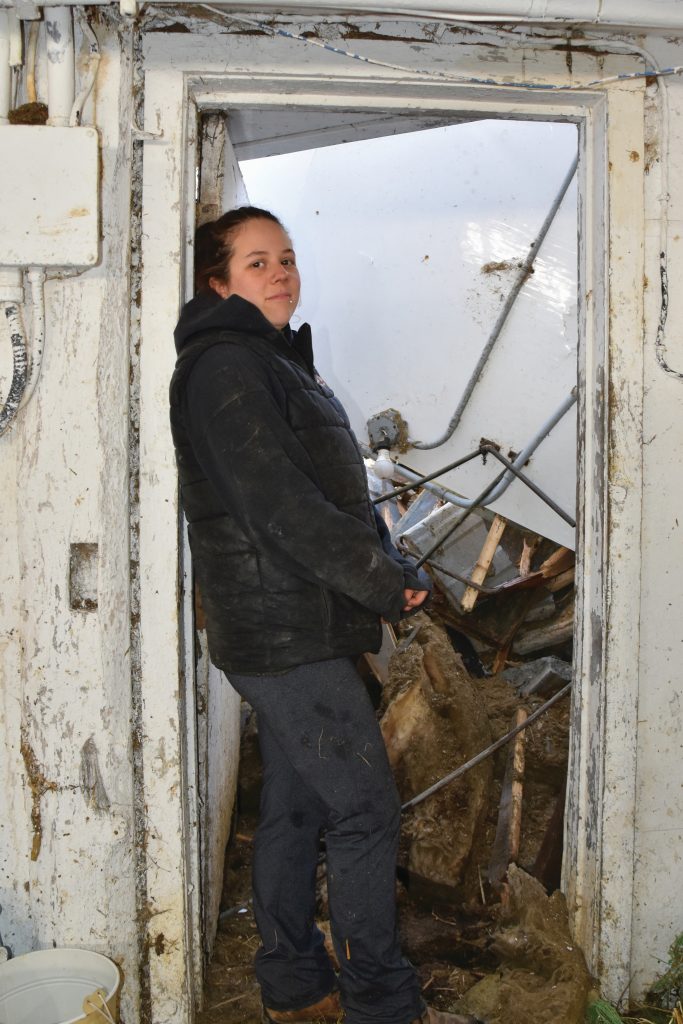 Caroline Rollins stands in front of the room in the barn that collapsed and filled up with pieces of cement from the silo moments after she left. She said her husband and father thought she was under the debris.