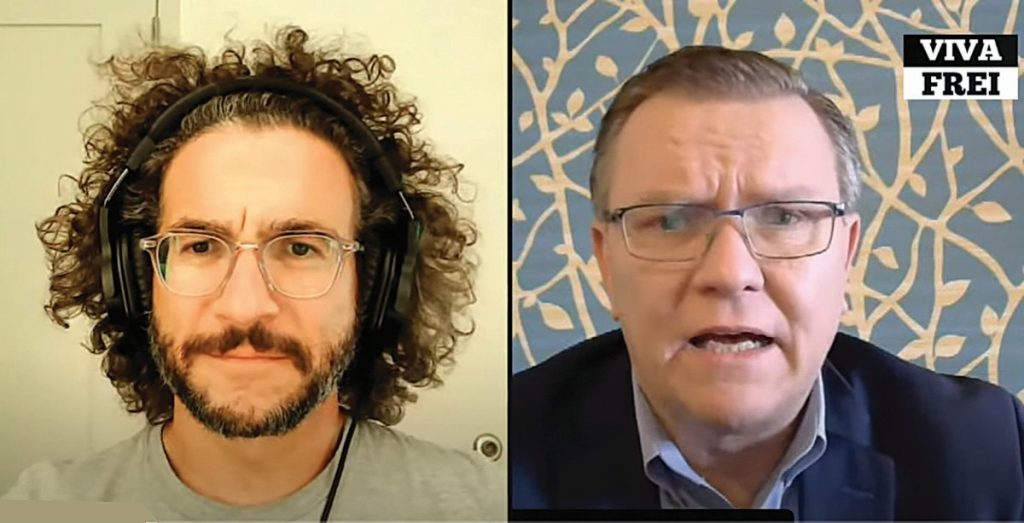 Viva Frei (left) in an online interview with Keith Wilson. Wilson is representing former Newfoundland Premier Brian Peckford in his lawsuit against the federal government for breach of charter rights regarding COVID-19 vaccines.

OTTAWA — Prime Minister Justin Trudeau and his ministers have been saying for months that they have been following the science and the advice of their experts on COVID-19. Explosive testimony in federal court says otherwise.

Court testimony that can now be accessed on the website of the Justice Centre for Constitutional Freedoms reveals that Canada’s top health expert did not recommend a vaccine requirement before boarding a bus, train or plane. Even worse, the human trial for the COVID-19 vaccine is now underway and millions of Canadians are part of the experiment.

It’s an astounding revelation, according to lawyer Keith Wilson, who is representing former Newfoundland Premier Brian Peckford’s lawsuit against the federal government for what they describe as the most far reaching breach of charter rights in Canadian history. It prevented six million people’s right to freedom of movement because of a ban against unvaccinated people from travelling on buses, trains and planes. This was not a city issue as Farmers Forum has spoken with many farmers across the province who oppose vaccine mandates.

In a Sept. 22 online interview with lawyer Viva Frei, Wilson walked through his cross-examination of government officials and was amazed at the media black-out on the progress of events.

Following court appearances including on Sept. 21, there were no cameras or interested reporters, Wilson said. “Zero news coverage. It’s like Premier Peckford doesn’t exist. It’s like this case doesn’t exist.”

The vaccine travel mandates affected six million Canadians, he said. “I have done far lesser cases many times where I have come out of the court house to a gaggle of reporters.”

He added that the federal government’s $600 million for mainstream media is having its affect.  “The media is so extremely controlled right now by their desperation for money. They are in a death spiral. More and more people are tuning out. They see it as propaganda.”

Wilson said that he cross-examined Dr. Lisa Waddell, lead epidemiologist for the Public Health Agency of Canada, who told the court that Canada’s top health agency did not advise Transport Canada to require a vaccine mandate for public travel within Canada and, in fact, said that scientific evidence would not support a vaccine mandate.

Not only did she not recommend forced vaccination to travel but “said it would not be epidemiologically sound advice,” Wilson said. “ And here it became the hallmark policy of the Trudeau Liberals to restrict six million Canadians from travelling within their country and leaving their country.”

He added that after it was implemented, emails from government officials revealed that they then had to come up with a rationale for the decision.

Wilson also said that the federal government even decided not to allow exemptions, even if it meant parents could not fly to visit a dying son in a hospital with one day to live.

Viva Frei added one horrific case where a woman suffering from loneliness due to lockdowns opted for government-assisted suicide. Her family “couldn’t give her the companionship necessary to save her life but were allowed to be with her when the state was putting her to death,” he said.

The nonsensical rules tormented millions of Canadians at a time when we knew the vaccines were not working Wilson said. This pointed to a policy of division from a very unpopular prime minister as a political survival strategy, Wilson said. “Get Canadians fighting amongst themselves so that they don’t notice the failings and the incompetency on a gross scale of the Trudeau Liberals and their cabinet ministers.”

Wilson also recalled his cross-examination of Dr. Celia Lourenco, director general for Health Canada that approves vaccines. She argued that the vaccination approval process changed for the COVID-19 vaccines. Until COVID, all vaccines were approved following animal trials and two human trial phases. But for the COVID vaccine the human trials were skipped.

Dr. Lourenco confirmed under oath that the human trial is going on right now as data is being compiled with the general population and Canadians were not told of the risks, he said. “That was a big one for us to get her to confirm that this is a huge experiment that’s going on.”

Wilson’s team has almost 15,000 pages of evidence and on Sept. 21 the pile almost reached the height of the judge. About 12 federal government lawyers asked the court to dismiss the Peckford lawsuit because the vaccine mandates were suspended on June 20. But the government merely “suspended” the vaccine mandates, Wilson shot back, noting that the Minister of Health declared that, “We will not hesitate to bring it back.”

If the court dismisses the case, it will undermine confidence in government institutions, Wilson said. If we don’t have access to the courts for a peaceful resolution, “What options does that leave Canadians?”