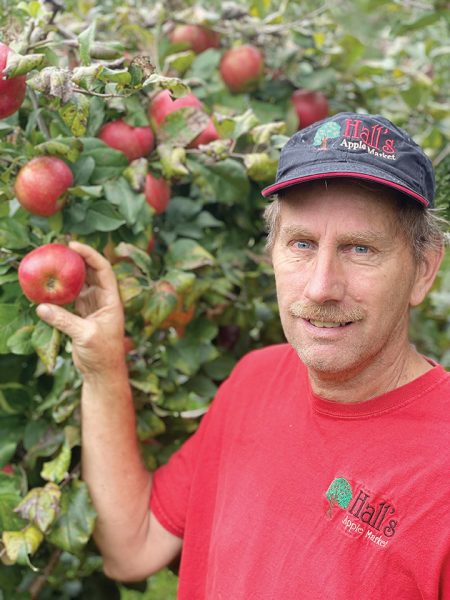 Chris Hall’s Brockville-area orchard has bigger apples this year and yield is up.

BROCKVILLE — The 2022 apple crop is looking great, producers say, as aapples are bigger and there are more of them.

“We’ve got a fantastic crop this year,” Chris Hall, owner at Hall’s Apple Orchard, said in mid-September, just as the operation was set to switch from “spot picking” of the red ones to full-out harvest of the autumn keeper apples like McIntosh, Cortland, Empire and others.

The apples turned out bigger than Hall expected as a result of rainfall that arrived in the crucial 30-day period before harvest that accounts for 80% of the fruit’s size. “And the apples got some sunshine, so they’ve got some colour,” he added. The harvest volume was also proving to be better than average, he said, adding that apple prices were thankfully staying firm as well.

Twenty-six apple varieties are grown at the Hall orchard, starting with summer apples like Yellow Transparents, Jersey Macs, Paul Reds and Lobos. Those varieties also turned out well this year and were mostly done for the season by the time September rolled around.

There were no particular problems with pests or disease this year, said Hall, with the exception of a single tree that came down with a case of cedar apple rust.

At Log Cabin Orchard in Osgoode, proprietor Darryl Maloney was similarly enjoying one of his “best crops ever” at the 10-acre pick-your-own operation featuring eight different varieties. The trees got off to a good start with “lots of blossoms this spring, and the bees were out to pollinate,” Maloney said.

By mid-September, the fruit was “colouring up slowly,” he said, as there hadn’t been many cooler evenings at that point yet. “But that’s coming.”

The pick-your-own crowds appeared to be down a little this year, and closer to pre-pandemic norms, he observed, following two years when orchards were among the few places people could visit for an outing.

At Moore Orchards in Cobourg, co-owner Heidi Behan reported “a large crop” of “lovely” apples —  which seemed to defy the dry conditions earlier in the summer. However, rainfall in August and September translated into plentiful fruit in the end, she said. “So they’re sizing up nicely and the colour is really good.”

One caveat: An August hailstorm damaged some of the crop at the 25-acre orchard. “Our apples on some of our younger trees … really got plastered,” she said, “but there’s still lots of fruit.”

At Marlin Orchards near Cornwall, co-owner Diane Lunan said they experienced hail damage last year but this year’s crop was shaping up to be above average.

Said Lunan:. “I always hate to talk about the harvest before it’s in, but so far, so good. Mother Nature’s still the boss.”