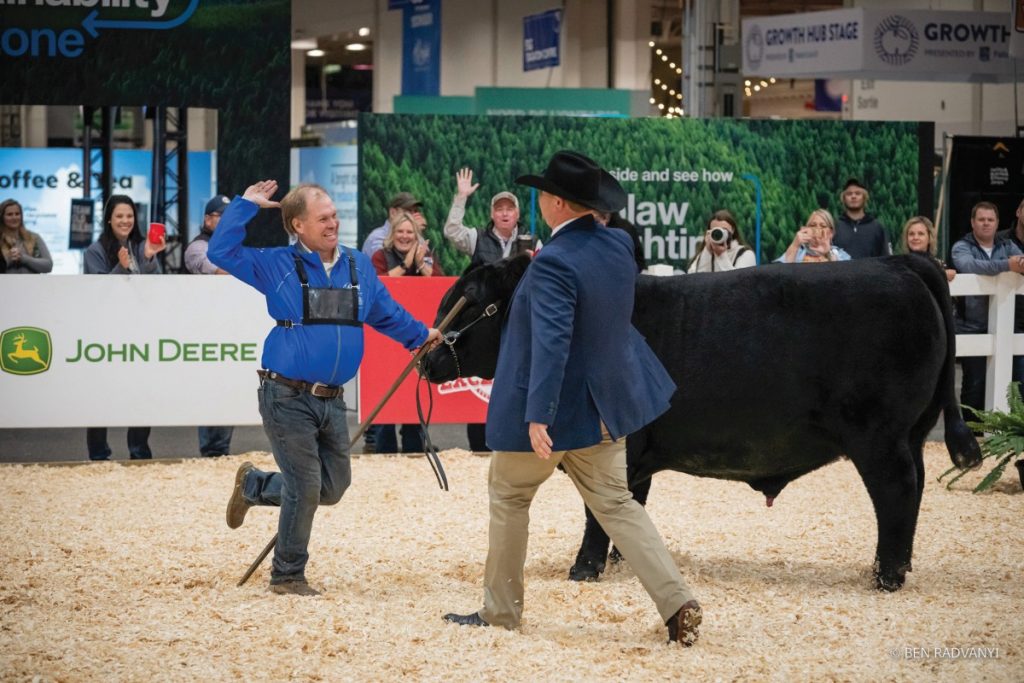 INDIAN RIVER — It was an impressive showing for the Indian River Cattle Company and the Elmhirst family who won 40 ribbons in their return to Toronto’s Royal Winter Fair after a pandemic pause.

Co-owner Billy Elmhirst reported one of the company’s best-ever finishes at last month’s Royal, including winning Supreme champion bull. Elmhirst said that his farm brought 32 head aboard three trailers to compete in the Angus, Hereford and Simmental shows. He also brought a working crew of more than 20.

“We planned to bring three big strings and be competitive in all those breeds, and I would say we succeeded,” said Elmhirst, adding the operation was focused on “gearing up” for the Royal this year. The operation earned 20 class winners, 17 division champions or reserve champions, 2 grand champions and 1 supreme champion.

“Especially after a couple years off … you get a little complacent, so it was good to get back there and kind of dominate and position ourselves nicely for the next sale season,” he said, explaining that the show burnishes the company’s reputation for top-flight beef breeding stock and pumps interest into their three annual cattle sales.

The Royal “is Eastern Canada’s showcase. If you can succeed there, it means you have a stranglehold on marketing going forward,” Elmhirst said. “Winning’s important, but it’s also just being there and having people look at your stock.”

Most of the animals he brought to Toronto were already sold and were being shown on behalf of the new owners, he said.

2022 was their first time at the Royal with a full complement of Angus cattle — a breed more recently added to their herd of 175. They’re otherwise known for their Simmentals and Elmlodge-prefix Herefords produced in partnership with his parents.

As it turned out, an Angus yearling partly owned by Indian River Cattle Company  — Buchanan’s Bruno — was named supreme bull of all beef breeds at the show.

“He’s got a pretty unique pedigree for Canada,” Elmhirst said of the bull that he purchased in Virginia. “And on top of that he’s so well built and so well structured, and has enough performance and is sound enough in his skeleton. He just covers all the bases. He was very popular at the show.”

Bruno — worth about $50,000 on today’s market — won other regional shows in 2022 and “has just been hitting a lick all year long,” Elmhirst said. “On top of that, he’s a good natured bugger. Good to work with. He’s always been kind of a gentle giant.”

Elmhirst said that Simmentals remain his favourite among the beef breeds. “I grew up with Herefords and married a Simmental girl,” he explained. “They’re awful good cattle for me. We’ve had the best luck with them.”

He sold one of his Simmental cows that produced a bull that sold for $280,000.

The Royal “was everything we thought it would be plus more,” he said. “The enthusiasm to be back in the barn, celebrate the wins and drown the sorrows. It’s just part of the business we’ve been lacking, and there’s no show like it.”

His own immediate family — he and wife Juanita and their adult children Owen and Katie —  were all in the ring during the supreme champion female “drive,” he happily recalled, adding that not many farm families enjoy such a privilege.

His parents Graham and Mary also attended as part of the “all family” affair, and a crew of about 20 hired friends played a vital role in this year’s success at the Royal, he said.

Katie Elmhirst, who returned home from post-secondary studies in the U.S. to participate in the Royal, won reserve grand showperson in the National Junior Heifer Show.