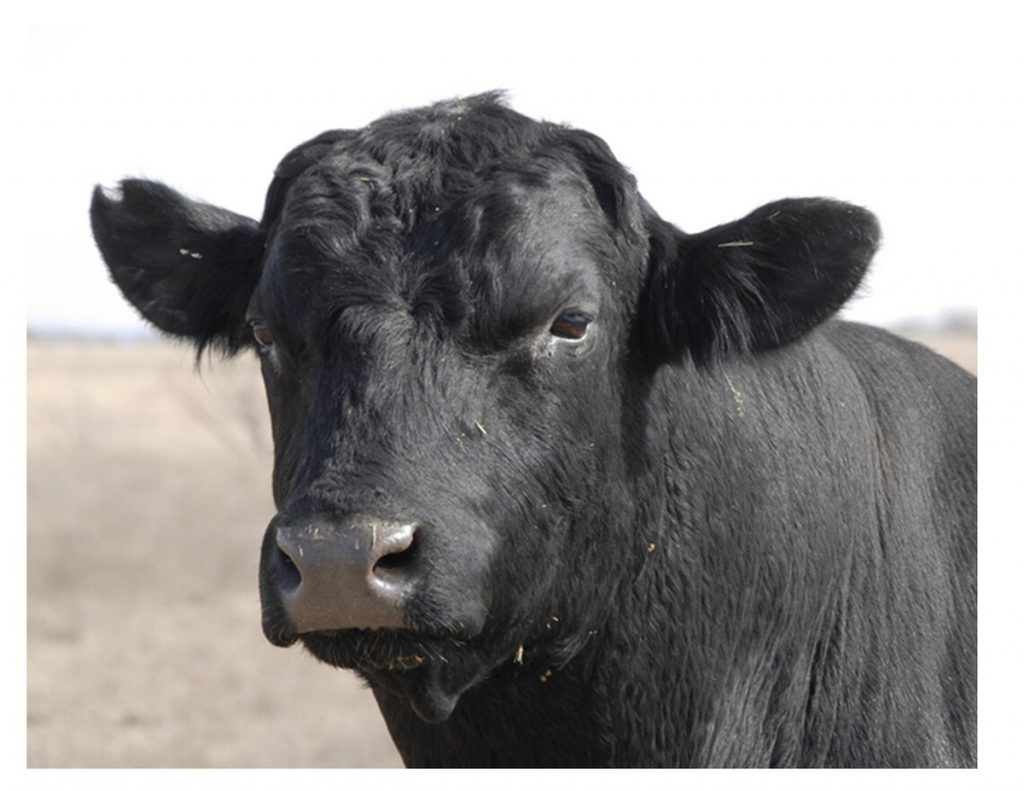 Breeding dairy cattle to beef bulls has been a growing trend for years, but now some farmers are taking the idea to a new level. (Jennifer Campbell photo)

About 15 % of births at the family farm, where they milk about 270 cows, are Black Angus-Holstein crosses, according to Stewardson. “We only do it with older cows, anything we don’t want replacements from,” he said of the beef-breeding program. They’ve been employing the technique for about five years.

“Sometimes … you want to keep the cow around for another lactation or two. It’s certainly a good option,” he said.

Angus semen is most popular for cross-breeding because of demonstrated easier births for the Holstein mothers.

The resulting crossbred calves are shipped out every two weeks, he said. A Norwich buyer picks them up when they’re still very young, once they’ve hit approximately 100 lb., and finishes them off to 1,400 lb. “We have enough that it’s worthwhile for them to pick them up, but not enough for us to efficiently finish them ourselves to market weight,” he explained.

Raising animals for meat, however, is not foreign to the operation. Stewardson says they do finish Holstein bull calves exclusively for the veal market — to a weight of about 750 lb. — in a specially set up bank barn for that purpose.

Sexed semen technology has empowered Ontario’s dairy farmers to produce adequate replacement dairy heifer calves with fewer births (by greatly cutting the odds of having bull calves). In turn, that frees up lower-producing cows to be artificially bred to beef bulls.

Beyond the extra revenue yielded from the sale of a beef-dairy crossbred cattle, OMAFRA touts potential savings of $50,000 to $60,000 annually at a 100-head milking operation when the strategy is also used to reduce the number of replacement heifers raised on the farm at any given time. Typically, a farm will have as many heifers on hand — in various stages of development — as milking cows. But when the herd is bred to sexed semen from dairy bulls, only the best cows are used to produce dairy heifer calves, making it possible to cut the number of heifer calves at the operation. Each heifer calf costs between $2,000 to $2,500 in space, feed and labour before it matures into a milk cow over a period of at least two years.

Stewardson said he believes the majority of Ontario farms are taking advantage of the opportunity to produce beef-dairy crosses at this point.

That’s the case at Maple Shadows Farms in Stratford, where “10 per cent or less” of births are beef-dairy crosses, said co-owner Joe Van Nes, who does not use sexed semen. “You’re always hoping for a beef bull cross. They start off pretty small and plain-looking, but in a couple weeks they look pretty nice.”

Breeding dairy cattle to beef bulls has been a growing trend for several years and industry estimates suggest that while more than 99 % of Holstein cows were once bred to Holstein bulls, that number has dropped to 89 %.

“I think there’s enough demand for beef out there that it hasn’t skewed the market.”

Stewardson agreed the pendulum could swing back to more dairy-calf production as prices fluctuate.

Eastern Ontario dairy farmer Steven Velthuis suggested that’s already happening. Some dairy producers with up to 30 % of their pregnancies to beef crosses will cut back to 15 or 20 %. “We need more animals making more milk right now,” explained Velthuis, who produces beef animals from his dairy cows — though he’s taken the process to another technological level: He uses some of his dairy herd as surrogates to carry purebred Wagyu and Angus embryos to term.

Eastern Ontario dairy farmer Eric Patenaude has also taken the production of beef-dairy animals in a different direction. His family farm — Ferme Gillette — bought a slaughterhouse to process the 150 Angus-Holstein hybrids the farm raises to market weight each year.

Ironically, it was the advent of sexed semen that reduced sales of genetics from the respected Ferme Gillette dairy herd. That prompted Patenaude to plunge into hybrid beef as an alternative source of revenue.

Patenaude said their beef — branded under the Gillette name — has proven “extremely popular” in his local community. “We’ve had a few restaurants come on board with our products, and we’re also working on a few different projects to move more beef in the future,” he said.