Banking on fright nights is a full-time business 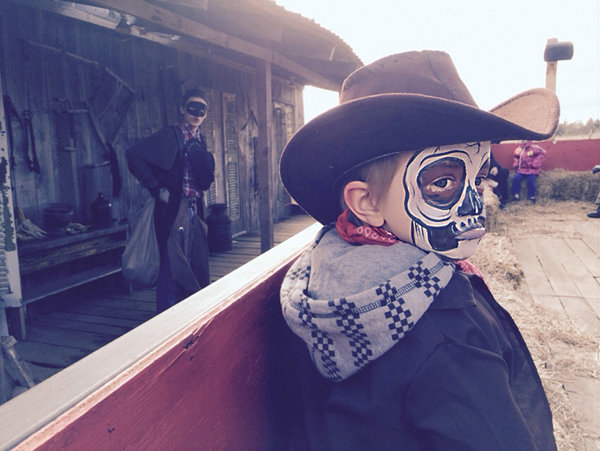 KITCHENER  The Christmas decorations are barely packed away but fear junkie John Snyder is thinking of Halloween.

“This is our full-time job  getting ready for October,” says the Halloween mastermind behind Snyders Family Farm and Fear Farm, 10 minutes southwest of Kitchener. “Theyre coming for a scare, so we like to give them what they want. Even on a cold night, the actors come out sweating. You have to be fit to work at Fear Farm.”

Its been a fall tradition for decades. Snyder pioneered the ghoulish attraction as a teenager with the previous owners and made it permanent 12 years ago when he and his wife, Meghan, bought the farm. The six-week fall and fear festival is the 100-acre farms sole source of revenue.

Theyre now seasoned veterans among farmers who capitalize on the thrill-seeking revenue potential of Halloween, betting the farm on a month-long scare-fest.

Theres family fun during the day, including clown and puppet shows, straw play areas, a 20-acre pumpkin patch, glow-in-the-dark mini golf, a candy barn with caramel apples and cotton candy, a grain bin converted into an apple fritter concession, and this year even two Frozen-themed events, where young fans mingled with Disney princesses.

But 7 p.m. is the witching hour. On 50 haunted acres, a hay wagon with 40 people trundles through the woods, passing through a graveyard and a burnt-out church  more spectacle than scare, Snyder admits.

The real chills come from the condemned cornfield and Hiller House, five attached 53-ft. long trailers that contain a séance, a freezer full of bodies, jail cells, and more with spooks lurking behind shower curtains, blending into walls, or wielding chainsaws. “It scares the pants off of people.”

For 23 years during the month of October, the farm has transformed into Fright Fest. Tickets are $32 to $35 and the farm gets north of 60,000 people each season, generating as much as $2 million annually  60 to 65 per cent of the farms revenue.

Saunders has five attractions  rated for fright by listing a number of chainsaws  including the barn of terror, a haunted hayride, and the all-new shambles, a maze inside three 40-ft.-long shipping containers where those who chance upon the ancient slaughterhouse are chased by chainsaw-wielding half-pig, half-man creatures.

“Lets say there is a lot of heavy breathing,” says Mark Saunders, the self-proclaimed director of fun, who runs the farm with his wife, Angela, and his parents, Bill and Anne.

Last year, the farm even partnered with a local brewery to debut the licensed Tipsy Tombstone Tavern for “when youre dying of thirst.” There was a half-hour stage show called The Plunger Games, a play on the popular books The Hunger Games, and a new post-Halloween pumpkin smash.

It isnt thrown together. Saunders required 200 employees to pull it off. Snyder had between 80 and 90.

The set-up takes months. Snyder works some 24-hour days in September and October.

For farmers considering a launch into any theme-related on-farm fun, here are a few things to know.

Snyder has insurance, hires security and a police officer, and needs a plan for disposing dumpsters worth of garbage every year

Think about zoning, washroom regulations, and health and safety, says Saunders, adding that regulations arent always clear. “There are a lot of balls in the air.”

2. Be close to a large population.

Only 10 minutes from Hwy 401, Snyders farm draws people from four large centres: Kitchener, the Greater Toronto Area, Hamilton, and London. He bombards one of the four markets each year with social media, radio commercials, and billboards.

Scare tactics need a makeover every year. Snyder usually rejigs one-quarter of his setup, with a second haunted house already underway for this year. He holds a brainstorming session to conclude what rocked and what flopped.

Dont dump money into it the first year, says Saunders. They started with a four-scene hayride and barn. “Its taken us a long time to get here.”

Snyder had eight actors and two or three scenes in his first year. “I think 300 people came out.”

Snyder gives his staff the power to offer free merchandize to fix problems. The feedback is so glowing that the farm was even mentioned in a visitors obituary.