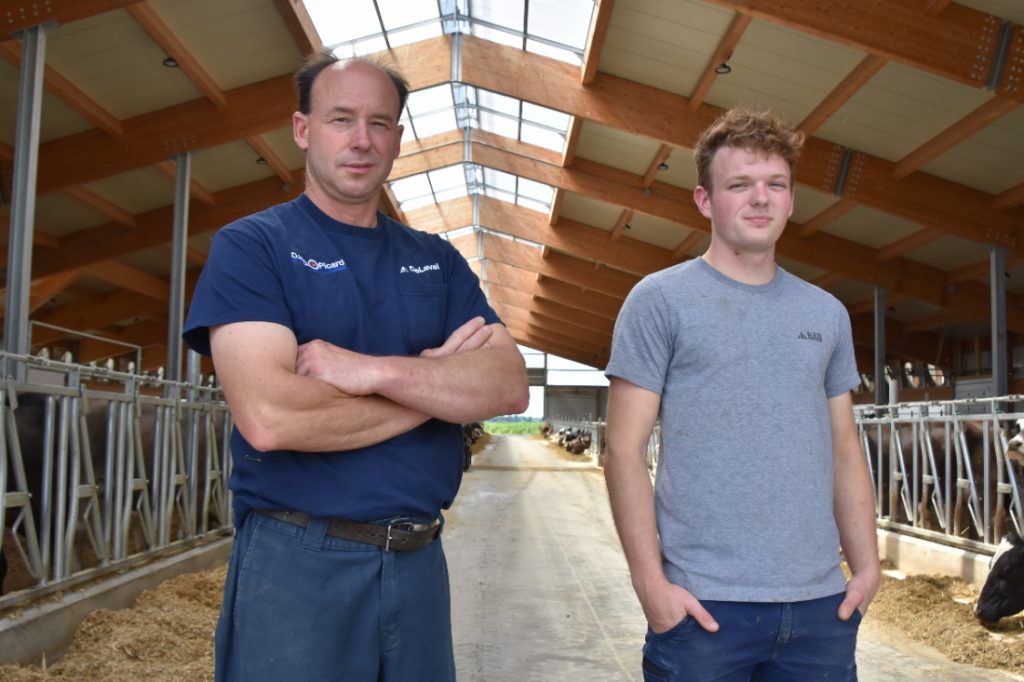 WILLIAMSTOWN — A next-generation freestall barn serves as the bright and efficient workplace of a South Glengarry Township dairy farmer and his next-generation business partner, a young man who comes to the operation through sweat equity instead of bloodline.

The $3.5 million freestall barn project at Rimann’s Maple Boom Farms went ahead because Adrian Rimann, 48, saw a future for the farm after bringing 22-year-old Sam Runions aboard as partner.

Runions started working weekends at the farm while still in high school seven years ago, zipping over on a four-wheeler to do the chores. His work ethic and passion for farming — despite not coming from an agricultural background — impressed Rimann. When the younger man completed his farm management diploma at McDonald College nearly three years ago, he graduated to full-time work and a partnership role at the farm.

“There were a few talks … he knew I was interested in farming, and … it was a good opportunity,” Runions recalls. “We work pretty well together.”

While Rimann has an adult son and daughter, neither was interested in taking on the dairy farm that’s been in the family since his own parents — Otto and Rita — bought it as a going concern in 1995 and still retain ownership. (Swiss immigrants, the Rimanns acquired the operation from a Dutch-Canadian family but kept the ‘Maple Boom’ name, which means maple tree in Dutch.)

“Because Sam was on board, it was easy for me” to agree to this project, Rimann says, “because there is somebody to keep on going.”

Having a longer-term outlook for the farm also made it possible to borrow the required project dollars, noted Runions, who helped choose the barn design, in concert with Rimann and especially their veterinarian, Dr. Brian Keith. The veterinarian’s role in the final design can’t be overstated, he adds.

Planning the new barn started two years ago. Its 5-row design was also heavily influenced by the University of Wisconsin’s dairy research. The farm will host an open house on July 6.

80 head of Brown Swiss cows were moved into the new 150-stall ‘Wolf’ brand wooden structure in January. 50 Holsteins were also purchased and added to the herd to meet quota.    (Nelson Zandbergen photo) 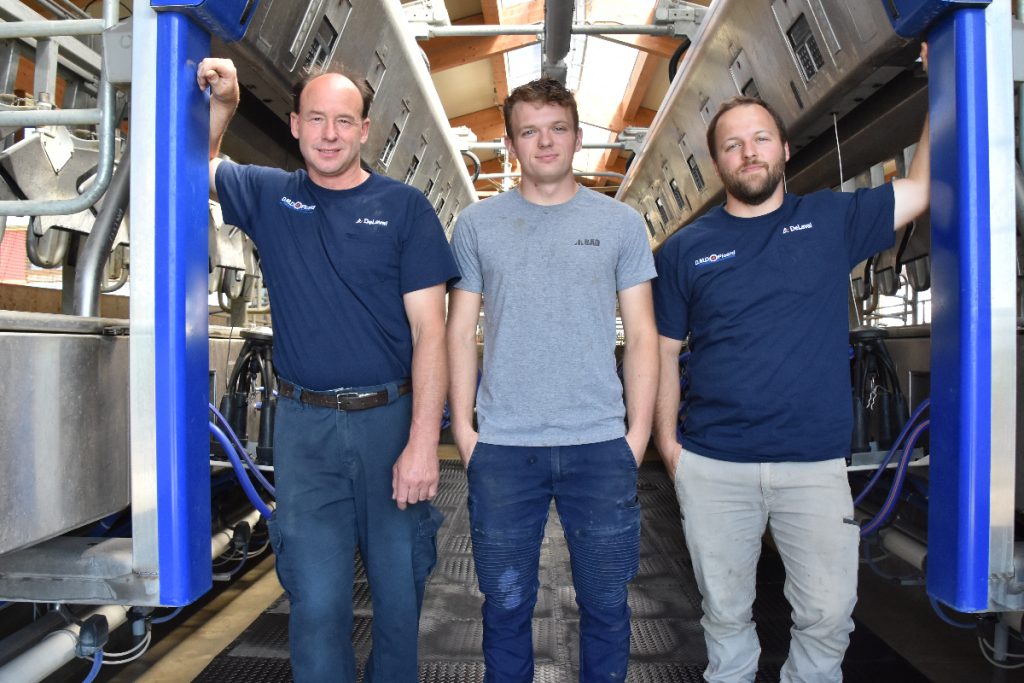 Located behind the farm’s 1973-vintage tie-stall barn, the new 150-stall ‘Wolf’ brand wooden structure received the cows in January and includes a double-10 DeLaval milking parlour, purchased from DMD Picard. The operators say they went through a two- or three-week “rough patch” as the original 80-head Brown Swiss milking herd learned to live in a freestall environment. At first, the animals had to be cajoled into leaving their stalls to go feed and be milked — but friends, family and DMD Picard staff all helped out.

While the cows found it an adjustment, so did Rimann, who concedes it was quite a switch managing the cows no longer in their usual places.

Fifty Holsteins — experienced with milking parlours — were also purchased and added to the herd to bring up production to the actual quota held by the farm. Rimann explains that his quota grew incrementally over the previous decade but couldn’t be filled in the old barn.

But with Runions committed to the farm it made sense to expand.

To ensure maximum investment in cow comfort, cost savings were found elsewhere by selecting used equipment where possible. For example, they reused the cooling compressors from the old barn in combination with a used, larger bulk tank . “It’s easy to change equipment, but you can’t make an alley bigger,” Runions says.

The partners settled on sand bedding for the production herd. Rimann concedes that lime and straw might have been his first choice but Runions won the day on that decision. They concede there is extra cost in having a manure pump able to withstand sand, as well as the need to bring in a manure boat to agitate the existing clay lagoon a few times a year, to keep it spreadable. But their somatic cell count is now a mere 80,000 since the herd settled into its comfy new digs, and milk production per animal has stayed about the same.

In addition to the wall-to-wall turkey curtains, the cows also benefit from a “positive pressure” ventilation system that includes wall-to-wall 40-inch fans along the length of the barn to blow equally on all stalls. Air exhausts out of the top of the building. It’s an improvement, Rimann explains, over the uneven distribution of fresh air with more commonly seen tunnel ventilation systems.

The structure doesn’t have built-in manure scrapers or automated feeding. For simplicity’s sake and to avoid mission-critical equipment breakdowns — especially on Sunday mornings — they rely on a pair of trusty skid steer loaders for manure clean-up as well as feed-pushing.

With the same portability in mind, they acquired a used tow-behind TMR unit to dole out the corn, silage and haylage ration in the ceramic-tile-lined mangers running the centre of the barn. They grow all of their own feed on 410 acres and continue to use their existing upright silos for storage.

Often operated by Runions’ brother, Tristan, a two-year employee of the farm, the skidsteer is also used to push manure into a central, gravity-fed tube at the centre of the barn — a job done when the cows are over at the parlour for twice-daily milkings. The manure naturally flows into a small pit before being pumped up into the existing, earthen lagoon at the farm. 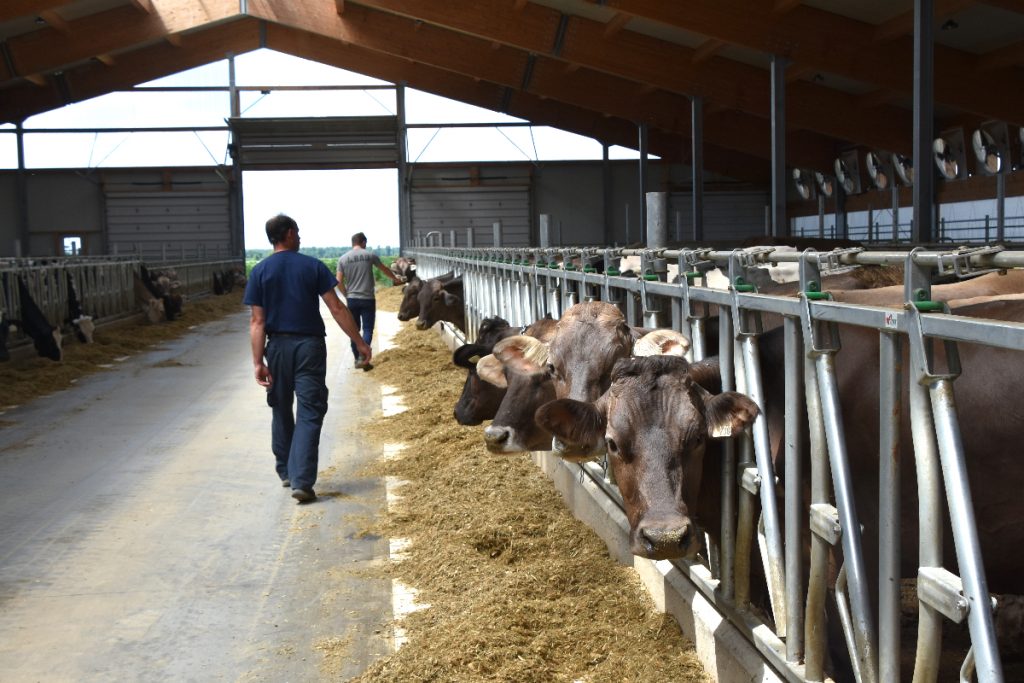 It took a few weeks for the Brown Swiss milking herd to adapt to the freestall environment.

The new, rapid-exit DeLaval milking parlour includes electronic milk meters tied into computerized herd management DairyComp software. That’s a switch, too, because the operation previously relied on paper records for herd management. A back-up computer resides in a control and medicine room, behind the parlour and crowding area. The room also has a master touch screen to control every aspect of the ventilation system. An app on Runions’ phone also allows him full access to the system.

But why a milking parlour instead of robots?  “Everyone asks that question,” Runions laughs. “Adrian kind of left it up to me. It was more about future expansion. With a parlour it’s really easy to grow and add onto it, but with robots it’s a little more difficult,” he says, adding the barn itself could be “easily” extended in its current configuration as well.

“And honestly, I think we still enjoy milking cows,” he says. “We don’t have a lot of cash crop or anything and the dairy is our focus.”

They’ve arranged the milking herd into three groups, each representing a row in the five-row barn: Cows on their first lactation, experienced cows up to 200 days of lactation, and cows at 200-plus days.

In one of the rows, dry and pregnant cows are kept on a corn-stover bedding pack, rather than sand bedding, and calve out on the pack as well. The final row has heifers six months of age and up.

They had hoped to be milking the new barn by last September, but as with everything during the pandemic, project completion took longer than expected — although not the main building shell. The concrete slab went down early in 2021, and the handsome Wolf structure, with its cathedral-like laminated wooden beams, arrived on the farm in 13 containers from Germany last spring. A small crew from vendor ThermoEnergy Structures Inc. of Arnprior erected the 121-by-287-foot building in just three weeks.

At the open house,  American veterinarian Dr. Gordie Jones will deliver  presentations on the  benefits of positive-pressure ventilation at 11 a.m. and again at 1:30 p.m., courtesy of Rideau-St. Lawrence Veterinary Services. 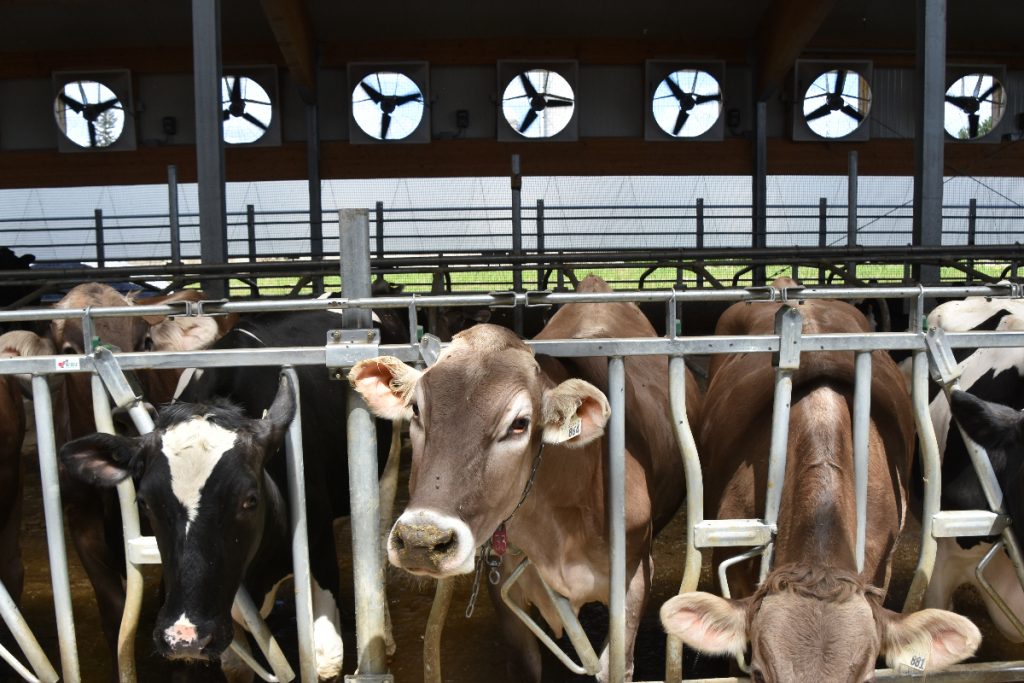 At the open house veterinarian Dr. Gordie Jones will speak on the features of the barn’s ventilation system.