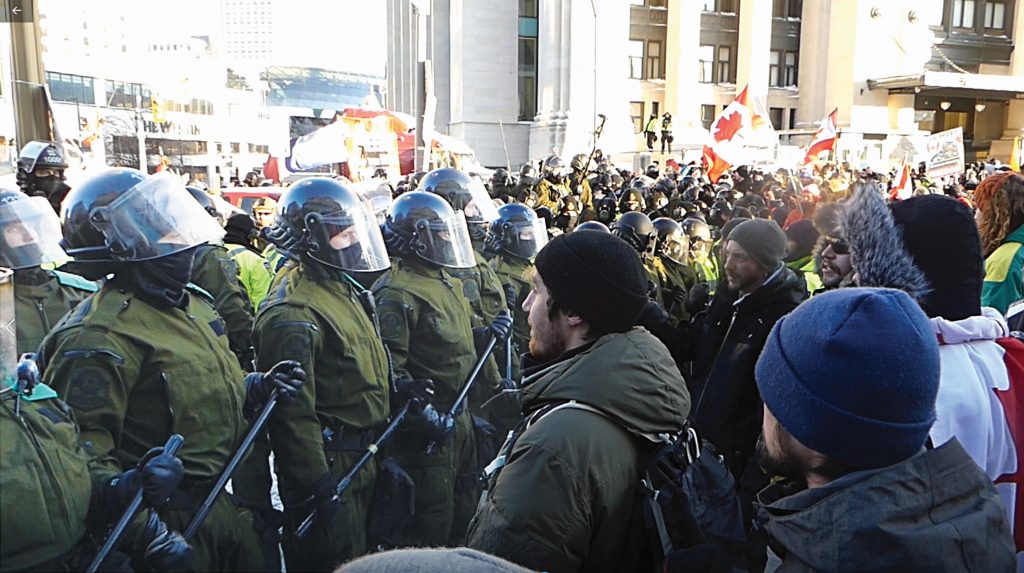 Ottawa used the Emergencies Act to stop the Freedom Convoy with a use of force and also ordered banks to freeze accounts.

OTTAWA — Canadians began taking their money out of the bank after the Trudeau government recently used the Emergencies Act to freeze bank accounts of supporters of the Freedom Convoy that parked more than 400 trucks and vehicles in Ottawa’s downtown core for three weeks.

Farmers Forum spoke with eight people so disturbed by the government’s lock on the finances of its citizens that they said they were switching banks or were pulling their funds altogether. Three people said that they either withdrew all or most of their money from their bank.

After invoking the Emergencies Act, the federal government went after the truckers and their supporters with armed police officers and other means. On Feb. 17, Canada’s Finance Minister Chrystia Freeland said that bank accounts, of those who directly or indirectly participated in the Freedom Convoy, were frozen. The RCMP reported that 257 bank accounts were frozen.

The day before, the five major banks had service outages for up to five hours, meaning that the banks went offline, blocking customer access to online and mobile banking, as well as e-transfers.

The banks reportedly hit by the outage include Royal Bank of Canada (RBC), BMO (Bank of Montreal), Scotiabank, and the Canadian Imperial Bank of Commerce (CIBC).
Many people are saying that there was an avalanche of withdrawals from Canadian banks, but that is only part of the story, according to a former TB Bank executive.

He noted that a power outage, likely caused by a storm, would typically be the reason for a bank outage and “there were no power outages that I’ve seen anywhere in Canada.”
He added, however, that cash is only a small means of doing business today and a run on cash reserves at a bank is highly unlikely. Even if banks began to run short of cash, the Bank of Canada could simply print more money, he said. He added that the Canadian banking system is difficult to crash as it is very stable, very risk-adverse and fared incredibly well during the 1990s mortgage crisis that hit the United States hard.

He added that the banks were obligated by law to obey the Financial Transactions and Reports Analysis Center of Canada (FINTRAC) to freeze accounts. Critics slammed that move as FINTRAC’s purpose is to track money-laundering and terrorism funds, not families who donated to the Freedom Convoy because they want an end to vaccine mandates or peaceful protestors.
Gallant conceded that the federal government’s move has not shaken trust in banks but in government. “People are p—– off with what’s going on,” he said.

Fear about the Canadian banking system, however, got an unexpected jolt from a Feb. 22 Facebook post by iconic Canadian psychologist Jordan Peterson, who has about 4.75 million Youtube followers. Said Peterson, “I’ve been in contact with a reliable source within the Canadian military and he told me today by email that if I had any sense I’d take my money out of the Canadian banks because the situation is far worse than I’ve been informed.”

Peterson added that by ordering banks to seize accounts the prime minister has “permanently destroyed 20 per cent of the population’s faith in the Canadian banking system and its reputation abroad.”

At around the same time, hundreds of twitter threads on the subject began to flood social media. As an example, one person wrote: “Pull your money out immediately! No point keeping your money in a bank if the government can freeze it on a whim.”

Despite that alarm, Gallant has not closed his bank account and Canadian banks continue to be favoured Canadian investments among many financial advisors.