Animal rabies way down across the province

Rabies infections continued an overall slow decline in Ontario last year, even among bats — the species most often infected.

Bats dropped from 41 cases in 2019 to 39 in 2020; 14 of those were in Eastern Ontario, up sharply from four infected bat carcasses retrieved a year earlier. 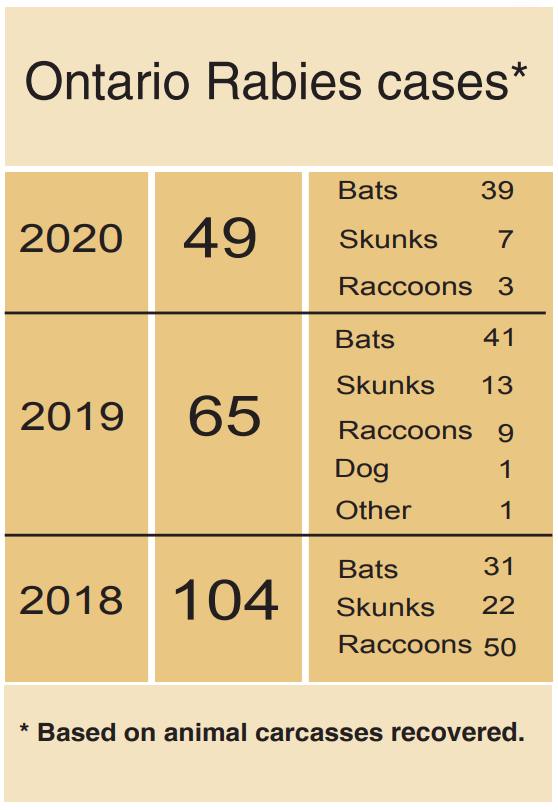 No domesticated animals or livestock were infected in 2020, down from a single rabid dog in the Niagara Region a year earlier. Niagara blipped upward from 7 combined cases in 2019 to 8 in 2020 — 1 bat, 3 skunks and 4 raccoons — again leading Ontario counties and regions in the rabies count.

Ottawa-Carleton and Renfrew County tied for first in Eastern Ontario with the most cases. They had 5 rabid bats apiece, while Stormont, Dundas and Glengarry counted 4 bats dead from rabies.

Ontario’s rabies numbers continue to trend downward. The province used to have much more substantial problems with the dangerous pathogen spread by bites and scratches. There were thousands of cases each year in the 1980s, with as many as 3,600, mostly in raccoons, in 1986.

A vaccinated bait program launched in 1989 has proved highly successful at curtailing the virus. Rabies is otherwise 100 percent fatal to mammals — including infected humans if they go unvaccinated long enough after exposure. That’s a kill rate even more fearsome than Ebola.