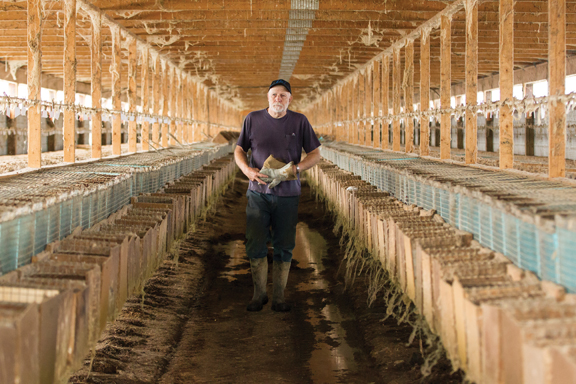 By Tom Collins
ST. MARYS — Animal activist groups are now openly threatening to attack Ontario mink farms.
A website posting by the North American Animal Liberation lists Ontario mink farm locations, each farm’s security measures, and this warning: “If you do not close these farms down, we will close them down for you.”
The Animal Liberation Front (ALF) wrote a letter to the London Free Press on Nov. 2 claiming responsibility for releasing 300 mink from a mink farm west of Waterloo on July 31.
“This farm was exceptionally primitive and run down,” the letter said. “It almost looked abandoned. The water containers for the animals here were covered in dust and spider webs, indicating that the mink here were being deprived of water for extended periods of time. We felt we had no choice but to release as many mink as possible from this hell hole. We rejoiced as we watched scores of them escape into the surrounding woods to freedom.”
Calling themselves the real humane society, the ALF wrote, “Until every cage is empty we will be on the attack.”
Activists went back to the farm a second time and, finding no mink, slashed four tires on the farmer’s truck and the front tires on both tractors. The farmer was so stressed he had trouble sleeping, said Kirk Rankin, Canadian Mink Breeders Association president and owner of RBR Fur Farms at St. Marys. The stressed farmer, who had been planning to retire within a year, packed it in early and recently quit the business, Rankin said.
Farm owner John Parkinson declined to discuss the attacks when contacted by Farmers Forum.
There isn’t enough of a deterrent to prevent activists from making and carrying out illegal threats, Rankin said, adding that police know of the threats but say there’s not much that can be done, even though the trespassers destroyed property and had weapons.
Rankin, who was also the victim of an attack this year when 6,300 mink were freed on his farm in July, is pressing the provincial and federal governments to step up punishments for activists. In the United States, activists can now be charged as terrorists.
“Penalties in Canada for what they’re doing are hardly anything,” said Rankin. A best-case scenario now would see an activist fined and sent to jail for a weekend, he said. “That’s not going to stop them.”
In the meantime, mink farmers have stepped up their security, said Rankin, adding alarms, video cameras and guard dogs. There are about 60 mink farms in Ontario and 300 in Canada.
“We are legitimate farmers, working seven days a week, 365 days a year, and we get some loonies that don’t understand the business,” he said.