Animal activists attacks on the rise — mink farmers fight back 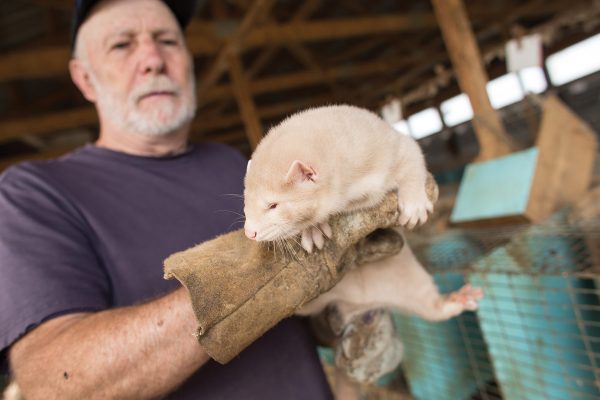 ST. MARYS — Last year farmers endured the humiliation of undercover on-farm videos. This year a new group of animal activists is using vandalism to make their point. In the past month, activists released mink from on-farm cages, super-glued locks at Ontario livestock offices and set delay-reaction fires on two trucks at a Toronto animal laboratory.

One mink farm owner targeted believes it’s just a matter of time before someone gets hurt.

Kirk Rankin, of RBR Fur Farms at St. Marys, north of London, said some American mink farmers have actually handed out guns to their workers and told them to shoot activists if necessary to protect livestock. Other mink farmers have resorted to digging trenches and hiring night watchmen to watch for activists from the trenches.

“Talking to the Americans, I can’t believe they haven’t shot a bunch down there,” said a frustrated Rankin. “If they have, they’ve ground them up and fed them to the mink and people don’t know about it. You can well imagine the different attitudes the Americans have.”

Someone released about 6,300 mink at Rankin’s farm on July 7, and it took about two weeks to recover almost all of them. Many of the young mink never left the farm as they ran around looking for their mothers.

No group has claimed responsibility for the attack.

“Nobody wants people to find out who the brain-dead people are,” said Rankin, who has 26,000 mink. “They don’t really give a s**t what happens. It has nothing to do with welfare. These guys are just plain terrorists.”

Rankin, whose grandfather started the farm in 1937, is now upgrading his security system to include alarms and video cameras.

The North American Animal Liberation Press Office website provides activists with a list of known fur farms in North America. There are about 60 mink farms in Ontario and 300 in Canada. Fighting back is the Canada Mink Breeders Association, offering a $100,000 reward for information leading to the arrest and conviction of the activists.

Activists released about 300 mink from John Parkinson’s Guelph-area farm on July 31. Parkinson doesn’t have gates, alarms or cameras, and hasn’t had an issue with activists in his 40 years of mink farming. Parkinson has about 1,100 young mink, as he has been slowly downsizing as he nears retirement age.

“This will accelerate my plan to get out of business,” the 62-year-old said.

In a third attack, about 150 mink died when animal activists tried to free mink from Glenwood Fur Farms near St. Marys, on May 30. Activists cut a hole in the chain-link fence and let loose 1,500 of 3,000 breeding mother mink from their pens. About 98 per cent of the mink were recovered.

Some mink died from stress, exposure on a cold, wet night, from fighting other mink, or were run over by cars on a nearby road.

Activists have also been focusing on livestock groups. Someone superglued locks at Ontario Pork and the Ontario Livestock Alliance buildings on July 18. According to the North American Animal Liberation Press Office website, this was done to “utilize economic sabotage to cost these organizations money that would otherwise be used to assist in carrying out the murder of innocent animals.”

“All it took was a locksmith to come in and change out the locks and we were back on track again,” she said, adding the group is reviewing its security. “In the livestock business, we respect that everybody has choices as to what they want to eat, what they want to support. We don’t impact anybody else’s decision, so it’s unfortunate they have to resort to vandalism to voice their concerns.”

On June 7, an activist planted fire-starting devices under trucks at Harlan Laboratories, an animal research lab at Mississauga. The fires damaged one truck and destroyed another. No one was injured.

Said the North American Animal Liberation Press Office website: “Our only regret is that the flames were extinguished before they had a chance to spread to Harlan’s offices.”

The activist group says it stands in solidarity with the recent attackers of Ontario mink farms. Mink farms have also been a target across the United States in recent years. An animal activist pled guilty in June of freeing 2,000 mink from an Illinois farm in 2013. He will be sentenced in November. The man and an accomplice, cut holes in fencing, vandalized farm vehicles, and wrote “Liberation is Love” on the barn.

The FBI charged two California adults, under the Conspiracy to Violate the Animal Enterprise Terrorism Act, for causing hundreds of thousands of dollars in damage during the summer of 2013. The FBI says the duo “snuck onto farms and freed minks and destroyed breeding records in Idaho, Iowa, Minnesota, Wisconsin and Pennsylvania during multiple trips, and in one case they released a bobcat from a farm in Montana.”