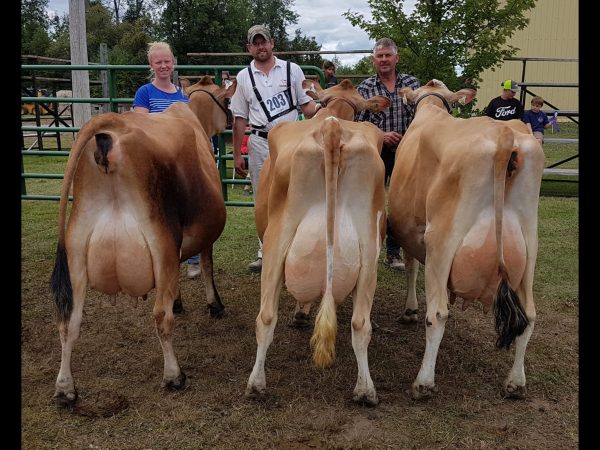 ONTARIO — Eastern Ontario again has some of the best Jersey cattle in the country, as recognized by Jersey Canada. Breeders and owners in the region are among those with Jerseys recently accorded 2021 “All Canadian” status — an internal contest showcasing top-flight animals previously shown in competition at least once in the previous year.

In Woodville, Clark Valley Holsteins owns the all-Canadian champion heifer, Payneside DBR Spruce and Pine, born and bred a little farther to the east, at Payneside Farms in Finch.

“She’s extremely stylish, with a beautiful sweep of rib and very confident on her legs,” Payneside’s Doug Robison explained, adding that his 19-year-old son, Dougie, sold her to the Clark operation in March 2021. The sale helped pay for the younger man’s first year of college, his father said.

“She was an easy keeper,” current owner Adam Clark said of Spruce and Pine. “She kind of just did it on her own.”

Clark explained that although Clark Valley is otherwise exclusive to the Holstein breed, the farm has dealt in Jerseys for about 10 years, keeping several animals at any given time. There’s good demand for the breed, particularly south of the border, he said.

“We did fairly well,” Mike Bols said, also pleased to see Drentex named as the recipient of a Jersey Canada Master Breeder Shield this winter.

“We sold them both last year,” noted Theo Elshof, who runs the farm with his wife, Ria, and their son, Kevin, who’s in charge of the breeding program.

Also the newly installed President of Jersey Ontario, Elshof confirmed that there’s strong interest in Jersey cattle, with the number of registered animals reaching its highest level since 1963.

On top of the breed’s renowned high butterfat, great strides have been made in the breed’s overall milk output. “Just the other day we sold five cows to another breeder,” he said. “There’s good demand for 5 or 10 cows at a time.”

Overall Champion Cow on the 2021 All Canadian list is Rexlea Joel Karause ET, produced at Rexlea Jerseys in Schomberg and owned by Glamourview Farms in Maryland.