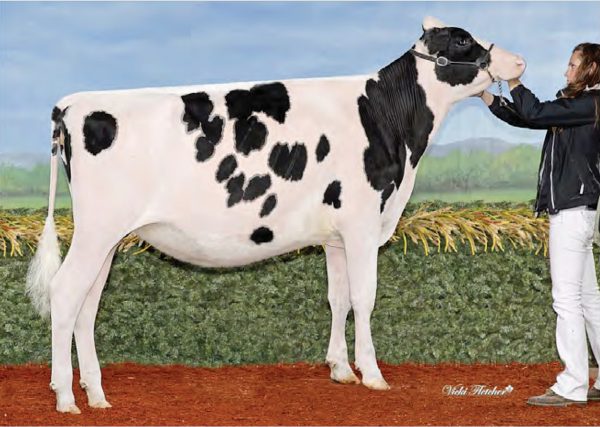 Eastern Ontario’s Kirklea Denver Baby Spice was awarded “all-Canadian” status by Holstein Canada. The heifer was recognized in the Senior Heifer Calf class. She is owned by Dalkeith-based farm Kirklea Holsteins, run by father and daughter, Robert and Bethany MacDonald, along with Bethany’s fiance Rob Heffernan.

EASTERN ONTARIO — The latest group of “all-Canadian” Holsteins includes a handful of animals owned by Eastern Ontario farmers. All-Canadian recognition is bestowed on the cream of the Holstein crop, based on show performance in the previous year. Holstein Canada took over the awarding of the status from the Holstein Journal three years ago.

Among the animals recognized as members of the 2021 all-Canadian team was Kirklea Denver Baby Spice, in the Senior Heifer Calf class.

“She’s just a good heifer,” co-owner Bethany MacDonald says of the recipient, a product of Kirklea Holsteins in Dalkeith.
“She comes from a line of a lot of good heifers,” says MacDonald, partner in the Kirklea operation with her father, Robert D. MacDonald, and her fiancé, Rob Heffernan. All three are listed as owners of ‘Baby Spice,’ which won its class last year at the Williamstown Fair as well as the National Holstein Show in St. Hyacinthe.

The operation has had plenty of all-Canadian animals over the years “but it’s still nice to win them, though,” she said. The honour adds to a farm’s reputation in the genetics market.

“It’s nice to have them, and we breed every day to make more all-Canadians.”

Heffernan also happens to own a piece of Knonaudale Oshiestorm — Intermediate Yearling Heifer All-Canadian — in partnership with Crysler-based Knonaudale Farms.

Cristoph Uhr at Knonaudale reported that members of Oshiestorm’s family have been nominated four years in a row. “The last time the Royal Winter Fair was on, her sister was Reserve junior champion,” Uhr said, “and the year before that, one had an hourable mention at World Dairy Expo in Madison.”

Oshiestorm also placed first in the Eastern Ontarion-West Quebec Show last year and was Junior Champion in Williamstown. She followed that up with an honourable mention in St. Hyacinthe. “She has good legs and a nice style and ring presence to her,” he said. “And a clean, long neck.”

Uhr agreed the all-Canadian designation “helps to increase your marketing overseas a little bit,” conceding that he sells some embryos into foreign markets “but not a crazy amount.”

At Clarkvalley Holsteins in Beaverton, herdsman Adam Clark was happy to see Holzer Warrior Princess recognized as the all-Canadian in the Red & White Junior Heifer class. The specific honour for Red & White Holsteins has been expanded to six classes, up from the previous four.

Bred by Bushy View Holsteins in Lakeside, Clarkvalley bought the winning animal as a baby calf. After her great run in 2021, she was next headed to compete at the New York spring show, Clark said.

Getting that all-Canadian status simply adds to the reputation of Clarkvalley, he said.

As for being a Red & White Holstein, “they’re just different,” Clark said. “It’s harder to have a Red & White at the highest level rather than a Black & White one.”

Uhr, who also owns some Red & White Holsteins, pointed out that “a really good red one is worth a lot of money but an average one is almost worth less than an average black and white.”

Twenty judges evaluated the entries and cast their votes online for their top choices. No 4-H classes were held in 2021 because of the Covid-19 situation, but Holstein Canada plans to resume those in 2022.