WATERLOO — Waterloo dairy farmer Jim Eby started selling milk from his Guernsey cattle — a breed with naturally higher amounts of A2 protein — a decade ago after finding many lactose-sensitive customers happily say they could drink it with less discomfort.

He transitioned to a fully A2 herd, getting each of his cows’ genotypes tested and selling those that did not have the A2/A2 genotype. He now milks 60 head of A2/A2 Guernsey cattle and sells the milk in his farm store and in over 100 stores across Ontario.

“When we started, hardly anybody knew what A2 protein milk was,” Eby said. “Typically, when a person says they have digestive issues with milk, their doctor tells them to stop drinking milk. Now there’s some healthcare practitioners who will say, ‘You should try A2 milk.’ People are becoming more aware of it.” 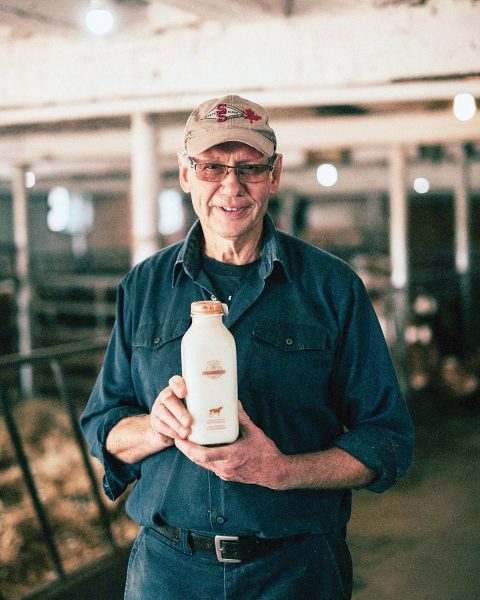 Waterloo dairy farmer Jim Eby milks 60 head of protein A2/A2 Guernsey cattle and sells the milk in more than 100 stores across the province as well as at his own farm. (Matt McDougall photo)

There are fewer than 10 farms selling A2 protein milk in Ontario, but interest in this niche market is growing. That’s why the farmer-run dairy solution company, Lactanet, recently started offering genotypic profile reports to herd owners who wish to increase the frequency of A2 protein in their cattle.

“We noticed there was a growing trend in farmers testing their cows for the A1 gene to know whether they are genetically able to produce A2 milk,” said Brian Van Doormaal, Lactanet geneticist and chief services officer. “We also noticed artificial insemination companies have been preferentially selecting A2/A2 bulls. Farmers are using a higher proportion of those bulls.”

Van Doormaal, the Lactanet project lead, says the company has been collecting the results of cow beta casein testing in a database of about 100,000 animals up-to-date. His team of geneticists used this data to build an algorithm to calculate the probability that a given animal is A2/A2, A1/A2, or A1/A1 based on its pedigree.

Within three weeks of their release, the reports were accessed by a quarter of Lactanet’s customers, demonstrating considerable interest.

Eby says he knows “quite a few” dairy farmers who now favour breeding with A2 bulls. He says choosing to breed your way to having a fully A2 herd can be a slow process, taking multiple generations, depending on your herd’s genotypic profile. Some are opting for the faster way: selling off those which are not A2/A2 and replacing them with A2/A2 cows, as he did, though it can be more expensive.

When starting his own milk production, Eby said “social media is the best tool you have. I believe this is an opportunity for dairy farmers, I really do.”

A significant number of Eby’s immigrant customers turned to his milk after not being able to drink regular milk in Canada. This is because the native cow breeds in countries like France and India have a much higher percentage of A2 genetics.

Eby says A2 protein milk is “certainly going to be the way of the future. I think the whole dairy industry needs to be moving in that direction.”

However, there is currently no established market for A2 protein milk. This creates a logistical problem with transporting it to processing plants, as it needs to be kept separate from regular milk, Van Doormaal said.

“At this point, there’s no way you can actually generate more income from selling it to the DFO because they’re not recognizing it, they’re not testing for it, and they don’t have a market for it,” Eby said.

Eby says the DFO has been reluctant to develop a market for A2 protein milk. “Sometimes things have to be pushed for a while before they’re accepted,” he said.

Farmers Forum contacted the DFO and received this email response: “To-date, Dairy Farmers of Ontario (DFO) has not had a request from a processor to supply A2 milk through DFO. The research on the beneficial effect on the digestion is still evolving. However, as the science develops, we will continue to examine new evidence and re-evaluate the market for A2 milk.”

“There are no processors asking for this A2 milk,” said Nick Thurler, Eastern Ontario DFO board member for region 2. “If a processor was asking for it, we’d find a way to sell it and fill that market.”