9-year-old wants to be a beef farmer; sells bird houses to buy his first calf 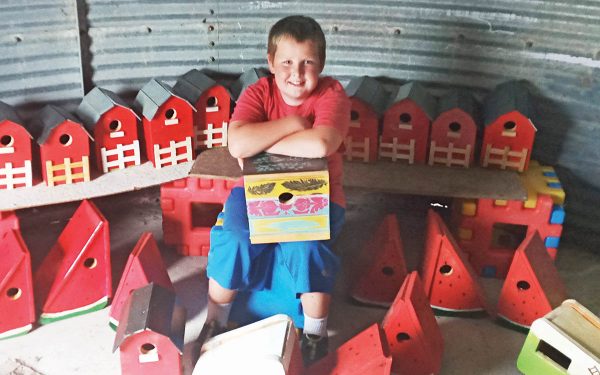 OMEMEE — Nine-year-old Cameron Ormiston aspires to be a beef farmer like his parents at Windyvew Farm, so he’s building and selling birdhouses to start his own herd.

The resourceful youngster is beginning modestly, with a single calf. His birdhouse project has so far raised about half of the $2,000 needed to purchase that first animal.

His mother Jennie says he’s made close to 100 birdhouses to date, with her assistance. They sell for $15 apiece and are available in the shape of a barn, watermelon, camper-trailer and standard designs that Cameron picked after looking at competition online.

“His dad is a millwright and very handy all around,” she explains. “He showed Cameron and I how to work the tools safely and together we have both learned some new skills in this venture.”

Cameron originally planned to sell sweet corn but switched to birdhouses in mid-August when his crop didn’t do well in drought conditions.

Buyers can purchase his handiwork at the Omemee farm and at local craft shows. He’s sold to buyers as far away as BC, Nova Scotia and even Nashville, his mother says.

One of four children in a family of 4-Hers, Cameron is eager to lead his own animal in the show ring. While the Ormistons raise purebred Charolais and Shorthorns, Jennie says her son will have the pick of any breed when he buys that first calf.

Cameron Ormiston is half-way to his goal of raising money to buy a calf.