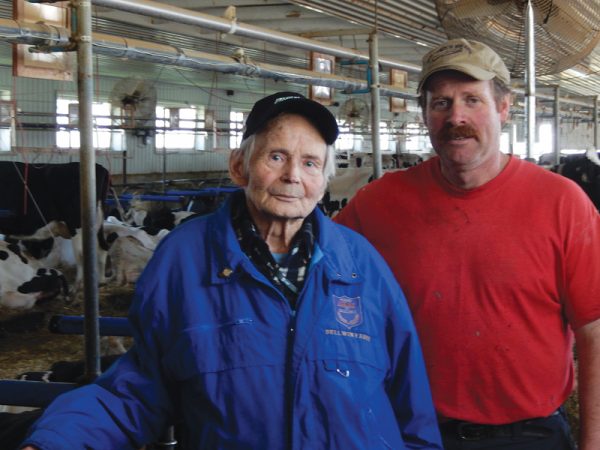 ELORA — Having proper feed rations is just one of the reasons why a Wellington County farm finished in the top five for breed class average (BCA) last year.

Bellwin Farms — owned by 84-year-old Jim Bell in Elora — finished tops in Western Ontario and fifth overall for Holsteins in the 2014 CanWest DHI (Dairy Herd Improvement) progress report for average BCA with a score of 302, increasing from 276.3 in 2013’s report. BCA measures milk, fat and protein. The second-generation farmer gives much of the credit to his herdsman, Glen Rhame, who has been farm manager for the past 30 years. Bell, who graduated from the Ontario Agricultural College in 1951, also has a couple of teenagers who work weekends, and his daughter Donna and her husband Tom are planning to take over the farm.

Bell, who milks 65 to 70 cows, says the key to success includes having a closed herd to keep diseases from coming onto the farm, water mattresses for bedding, and a tunnel ventilator in the barn to create a wind tunnel and keep the flies out. Feed is also a priority, with all corn, barley and alfalfa roughage grown and consumed on the farm. The feed is tested every month for nutrients and balanced according to the cows’ needs.

“We feed the cow what she is supposed to eat, rather than what she wants,” he says. “If a cow is producing 80 pounds of milk per day, she has to have so much protein, so much energy and so much minerals to be able to do that.”

Stanton Bros Ltd., owned by Laurie, Jim and Jeff Stanton of Ilderton, near London in Middlesex County, finished 10th overall in Ontario among Holstein owners, the only other Western Ontario farm to crack the top 10.

Here are the top-ranked dairy farms for highest BCA average in the counties covered by
Farmers Forum and according to the 2014 CanWest DHI progress report.