No more quota? Go for goats! 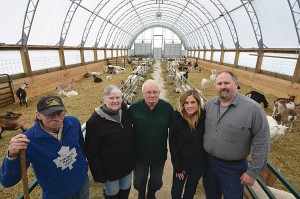 Dairy farm to produce as much goat milk as cow milk

MAXVILLE — It only took a few days for Charlie Jack to realize he couldn’t give goats any wiggle room at the feed bunk — any more than seven and one-quarter inches led to a jailbreak.

“If it’s an inch too big, they’re out. They’ll wiggle themselves sideways to get out of a hole,” says the Maxville dairy cattle farmer, whose fiancée Tammy dived headlong into milking goats last month. “She’s got more compassion for goats than the rest of us. To me, most of them are just a number.”

It was a way to expand, says Charlie, who milks 54 cows with his parents, Peter and Lynda, and their long-time employee, Allen Meldrum. “It’s too hard to buy quota. It’s expensive and the barn is full.”

But the real driver was a bid to give Tammy, who works off-farm as a personal support worker, a full-time farm income.

There wasn’t the money in meat goats to justify a new barn, but the Jacks ran the numbers and dairy goats were a no-brainer.

Gross profit is $1 per litre for goats compared to 80 cents for cows, processors can’t fill demand, and there’s been a 10 per cent price increase from the Ontario Dairy Goat Co-operative Inc. in Teeswater in the last year, says Charlie. But their goats produce 2.4 litres per day — with a goal of reaching three litres in a few years’ time — while an average cow produces 30 litres.

The Jacks aren’t alone: They know of three other new goat farms in the area within the last 18 months. Eastern Ontario is home to about 15 of the 230 licensed dairy goat farmers in the province.

Even suppliers are chomping at the bit. Word got out the Jacks were talking goats and nine feed reps came calling, says Charlie. With cattle, quota, and land behind them and a 26-page business plan, the bank took on its first goat operation in the area.

“We put that proposal to the bank and three days later it was a go,” says Charlie.

The barn, parlour, goats, and co-op shares cost about $300,000, but it could have easily been $500,000 if they didn’t have the equipment or cattle income to offset costs such as vet bills, Peter says. With Tammy’s salary factored in, they expect to pay back their investment in 10 years.

We Can Contracting put up a 150-ft. Winkler fabric barn last summer and the Jacks built a double-16 parlour and heated nursery. The goats moved in mid-September and began milking last month, with Tammy up to 80 goats within a month. The plan is 250 goats by fall, and 500 in two years — at that point, they’ll be producing as much goat milk as cow milk and with replacement stock sales, it’ll add up to half the farm’s dairy income.

It’s a lot of trial and error. Their vet has now treated his first goat and it’s double the work to get the same volume of milk from goats as they get from cows, Charlie says.

Without a farm background, it was a steeper learning curve for Tammy, but goats are easier to handle than cows for both her and the couple’s five children.

At first, it took a bit of finesse to get goats to the parlour and to stay still with the milkers on, but the goats soon figured out they got corn and concentrate at milking. “Now they run,” says Tammy.

Within a few weeks, she had gone from taking an hour and a half to milk 20 goats to milking 70 in little more than an hour. It only takes a couple minutes to milk each goat.

But at the same time, goats will happily eat a Christmas tree, says Tammy, who hauled theirs out to the barn after seeing it on the news. “They only thing left was the trunk.”

She is clearly smitten with having pets as a business. “They’ll nibble on your ears and give you kisses, putting their head under your arm to be petted. They even come and say good morning.”