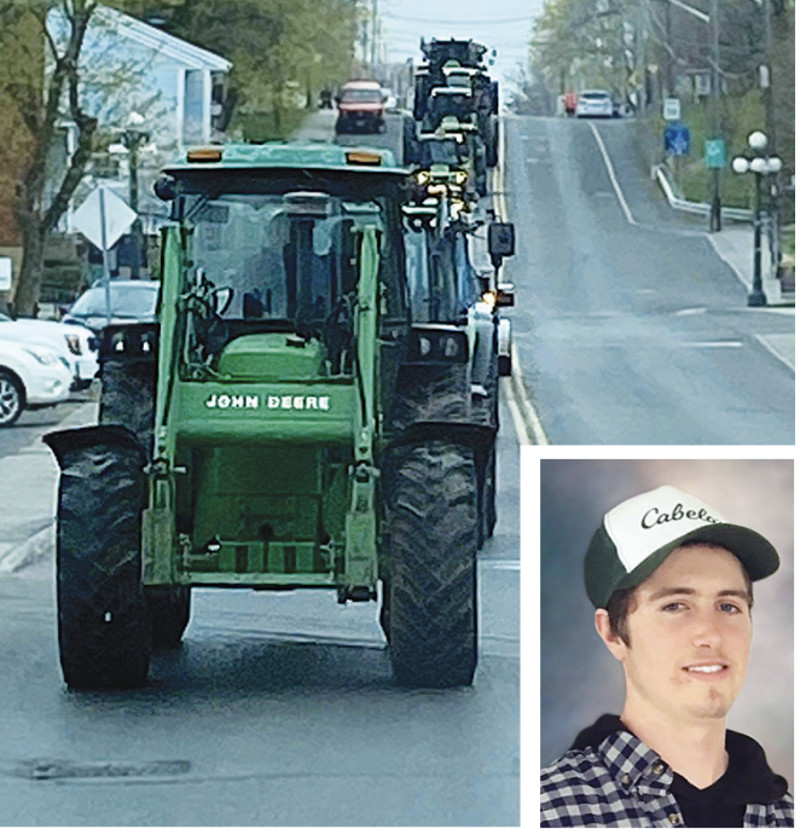 A parade of 45 farm vehicles drove through Carp to honour James Scissons.

KINBURN — A tractor parade paid tribute to a young dairyman killed in a single-vehicle ATV accident on the family farm on April 16.

The tractorcade of 45 machines honoured 22-year-old James Scissons on April 25, the day of his wake, through the town of Carp, west of Ottawa, and past the Scissons farm and to the funeral parlour where his grieving family had gathered.

Close friend Kyle Norton, 28, estimated that 500 people rolled through the Tubman Funeral Homes site (including cars and trucks) to pay their respects.

“He was an awesome kid,” Norton said. “James liked to look after the barn and he did a really good job. He had a lot of friends.”

Norton himself was raised in the Scissons household from a young age and shared a room with James’s older brother, Jake. Now working at a neighbouring dairy farm, Norton said that he and James enjoyed going fishing together.

Norton said he doesn’t know how the accident occurred, just that the young man was on the farm “and going for a little drive, and he never made it.”

Ottawa Police responded at 7:10 a.m. on Saturday, April 17, and said the driver was pronounced dead at the scene as a result of an ATV collision. “The collision investigation unit is investigating and no further details are available,” OPP says.

The Scissons milk about 40 cows in Kinburn. James was “coming into his own as a young dairy farmer after winning a 2020 quality milk award at the family dairy farm,” said one of the parade organizers, Joey Wilson.

Neighbouring cash-cropper Daryl Eastman said that he and his wife rode together in their tractor for the parade. James “was a very fine young man,” Eastman said, adding it’s a big loss to the community to “lose an aspiring young farmer like that.”

He added that the “two boys and their father, Wayne, have been doing great things on that farm. I can’t imagine anything more devastating than losing a child.”