22-year-old farmer killed on the job 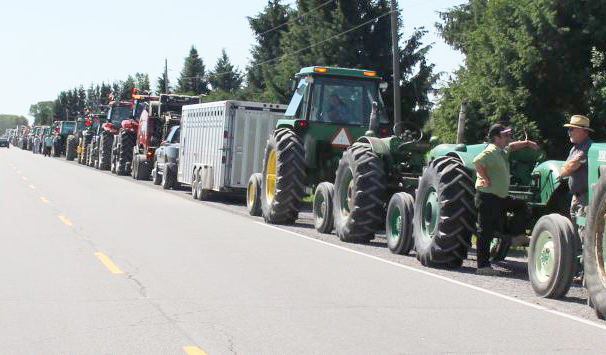 PAKENHAM — Two days after 22-year-old Christopher Duncan died in a tragic farming accident, 300 people showed up at his parents’ house.

“He just touched the lives of so many people, it’s unbelievable,” said his father Jeff Duncan. “It showed in my yard last night with all the people that were here. His own friends he grew up with, he went to public school with, he crawled around on the floor in his diapers with. They’re just as devastated as are my wife, myself and my daughter. It’s just unbelievable how much of an impact he left on people’s lives.”

At about 8:45 a.m. on June 19 fourth-generation farmer Christopher Duncan got tangled in the beaters while cleaning inside a running forage bin at Madawaba Farms at Pakenham. He was transported by air ambulance and pronounced dead at the Ottawa General Hospital. About 77 tractors, trucks and trailers lined the funeral route on June 24 to salute their fallen brother.

Duncan is the seventh on-farm farm-related death in Ontario this year.

About eight years ago, teenaged Duncan said he didn’t want to farm and his father sold the cows and quota. At age 18, he joined the U.S. harvest and drove a combine across North and South Dakota. It was a 36-hour bus ride home. Two years later, he went west again, this time to big sky Saskatchewan to drive tractor trailers and combines. He came home for the winter and was working as a snowplow operator when he decided that farming really was for him.

Duncan and his father got back into the dairy business two years ago and were milking 41 Holstein cows as of last month.

“Sometime it takes an experience of being away from the farm to make you want to be more attracted back to the farm,” said Duncan’s father.

Duncan’s uncle Bill said his nephew is being remembered through a makeshift monument at the barn where the accident occurred. The family resurrected the flower beds and Christopher’s friends began hanging their ball caps on the lights and hooks around the windowsills.

Bill described his nephew as an older man in a young man’s body. “He treated people with respect. He loved his friends and they loved him,” he said. And he lived the biblical golden rule. “He liked to treat people the way he wanted to be treated back.”