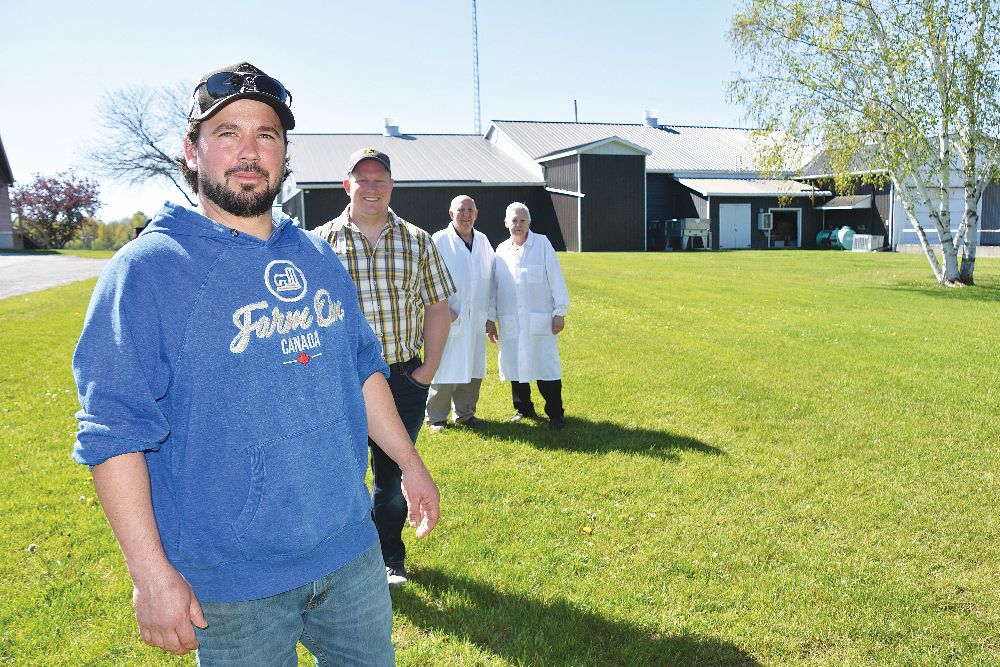 Eric Patenaude, foreground, is the beef farmer in the three-buyer deal to buy Henderson Meats just outside Chesterville. The hog farmer-buyer is Devon Hakvoort, next to Patenaude. At back is the retiring Tom and Betty Henderson. (Nelson Zandbergen photo)

CHESTERVILLE — Tom and Betty Henderson stopped milking cows to go into the slaughterhouse business, in the process turning Tom Henderson Meats & Abattoir Inc. into the biggest provincially licensed meat plant in Eastern Ontario. Now, after 40 years of operation, the couple have sold the enterprise to three new local owners: a beef farm, a hog farm and a fast-growing meat delivery company in the Nation’s Capital.

The buyers officially took ownership May 14 and include La Ferme Gillette Inc., an Embrun dairy and beef farm, and hog farm Golden Rail Farms Inc, of Finch. They were already the largest sources of beef cattle and pigs into the plant. Golden Rail produced 20,000 head farrow to finish in one year. To complete the trio, they’ve teamed up with distributor Ottawa Valley Meats (OVM) to manage the MacKenzie Road facility in the equal-share venture.

The two farm operators accounted for over a third of the animals slaughtered weekly at the facility and it only made sense to them to buy the operation, explained Eric Patenaude, who handles a 150-head-a-year Black Angus beef operation at Ferme Gillette (which is perhaps better know for its storied Holstein dairy herd. The farm owned Smurf, which made the Guiness Book of World Records for producing more milk than any other cow in a lifetime).

The deal made sense to Ottawa Valley Meats as well, because Ferme Gillette and Golden Rail Farms was the source of all of their beef and pork. They deliver straight to customers.
Farmers buying abattoirs is not unique. In fact, it appears to be a trend. Recent farmer acquistions include abattoirs at Athens, Chrysler, in Prince Edward County and the Ryding-Regency plant at Toronto.

At the same time, Ontario’s been bleeding small abattoirs for years. From 2006 to 2016, Ontario dropped from 189 to 141 abattoirs. Finding buyers willing to cut meat has been a challenge. But abattoirs during the COVID crisis have never been busier. Many are booked a year in advance.

Patenaude pointed out the new ownership group “had the most to lose” if the slaughterhouse shut down or was sold to outsiders with potentially different interests. Pouring “gasoline on the fire” of their resolve was the emergence of a buyer from outside the area, said Patenaude, one of several family partners within Ferme Gillette.
“All three of us saw the same thing,” he said. “You have two producers: one beef,one hog and a distributor. It was a once-in-a-lifetime matching opportunity.”

Golden Rail Farms Inc. is co-owned by Devon and Beatrice Hakvoort. Devon Hakvoort told Farmers Forum he looked forward to shipping another weekly load of 150 hogs to the slaughterhouse, knowing he would be among the owners. “I’m plenty excited … and I would like to thank Tom Henderson for selling,” Hakvoort said.
Patenaude echoed the sentiment, saying the group had “big shoes to fill.”

While it’s not yet clear if Henderson’s might see a name change, the faces in the building will mostly stay the same. Almost all of the current staff will remain. That includes Jim Henderson, son of the founders. “He’s a really important part of the team,” Patenaude offered.

The new owners also plan on ramping up production, moving to double shifts this month. They also plan to expand the plant in the next year to 18 months.
A modern, online booking system will be put in place as well, according to Patenaude.

Darius Campeau, one of three partners in Ottawa Valley Meats, said he never expected “in a million years” to end up an abattoir co-owner three years after establishing his meat-delivery firm specializing in product sourced from area farms. Bringing a shift to online sales and home delivery, the pandemic has “definitely” contributed to an uptick in business that made OVM’s participation possible, he said.

Meanwhile, the retiring Tom Henderson, 73, said he looked forward to a couple of days of fishing before returning to the plant for a couple more months of work through the transition. He wasn’t sure what he would do after that.

Wearing a white butcher’s smock, his wife of 55 years said she looked forward to spending more time with their grandchildren, including one great-grandchild.
Betty Henderson seemed briefly emotional as she remembered how they moved to the plant location in 1981, establishing what was then just a small cut shop with a couple of freezers. The plant was built in 1983.